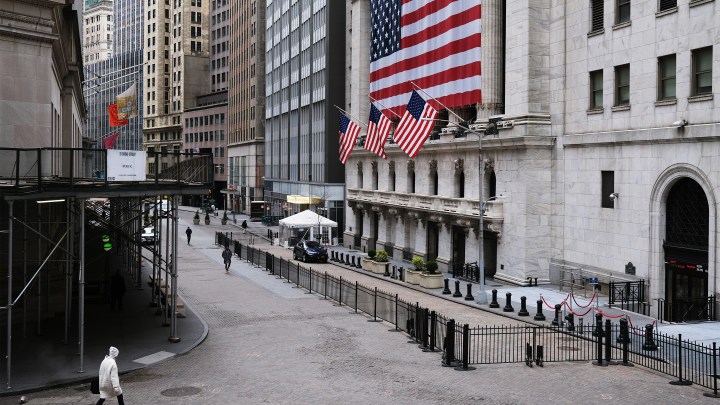 The U.S. economy started the year with a bang. Gross domestic product, which measures economic output, increased at an annual rate of 6.4% in the first three months of 2021. GDP is expected to keep sizzling this summer. But what happens in the fall? We asked a few economists what could boost growth or hold it back.

Imagine yourself in October. The leaves are changing. The kids are agonizing about what they’ll be for Halloween.

Doug Roberts, founder and chief investment strategist at Channel Capital Research, predicted that by then, we’ll have just exited what he called the “economic sugar high” of the summer, when pent-up demand sent the economy sky-high. He said, “You’ve had a beach ball that’s been pulled underwater for an extended period of time, so to speak, with the economy during COVID.”

Roberts also said that Congress could give the economy a bounce this fall by agreeing on an infrastructure package with President Joe Biden that would go “into effect next year and clicks in right, maybe when the beach ball needs a little bit more air. That could be very, very positive.”

But there’s a caveat. Roberts said the fall could also bring economic threats. Some people are behind on their rent. Others have deferred their mortgage payments. Foreclosures could be looming.

“So right now,” Roberts said, “those are going to be the three, if you want to call them, Horsemen of the Apocalypse that we really don’t know where we are.”

But those horsemen will be met by a powerful force this fall. The holidays will be around the corner. Store shelves with candy and costumes will be replaced by Santa and displays of video games.

Michelle Meyer, head of U.S. economics at Bank of America Global Research, said consumers will not hold back. “And importantly, not just buying stuff, but also going places. Going on vacations or to different leisure activities. Visiting family and friends.”

Meyer does expect GDP growth to peak in early summer, rising 11% from the first quarter of the year. Still, she said, all that holiday spending and traveling will help to keep the economy growing this fall, just not as fast. She expects it to rise around 5% from the summer.

Here’s another caveat, though. There’s a grinch that could steal GDP growth: inflation. Beth Ann Bovino, chief U.S. economist at S&P Global Ratings, said if prices rise, consumer spending could fall. “Given how prices have been so low during the pandemic, they may feel a bit of a sticker shock when they go to the gas pump.”

Bovino said GDP growth this fall could also be tripped up by her own three horsemen: labor shortages, continuing kinks in supply chains or outbreaks of new COVID strains.

But, in spite of all these risks, her outlook for economic growth in the last quarter of the year is pretty rosy: “We’re not expecting it to drop off a cliff. We’re expecting a growth rate of about 2.8%.”