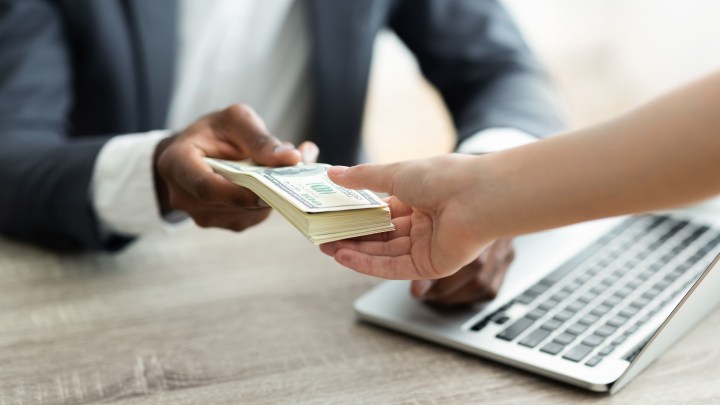 COPY
Some executives in Britain are receiving bonuses for making ethical decisions. But critics wonder why executives need to be paid extra for doing the right thing. Prostock-Studio via Getty Images

Some executives in Britain are receiving bonuses for making ethical decisions. But critics wonder why executives need to be paid extra for doing the right thing. Prostock-Studio via Getty Images
Listen Now

Has the corporate world hit on a brilliant new ploy for paying chief executives even more cash? Forty-five of the United Kingdom’s top 100 companies, according to a recent study, are paying their CEOs a special bonus for running the business ethically.

If executives are deemed by their board’s remuneration committee to have achieved certain environmental, social and governance, or ESG, goals, they will be rewarded financially. Those goals might include avoiding environmental damage, combatting climate change, improving diversity among the workforce or otherwise behaving in a socially responsible manner.

Some shareholder pressure groups are beginning to balk at the very idea of ESG or ethical bonuses.

“I think if you’re paying somebody to run a company, you shouldn’t give them a bonus to do their job properly,” said Martin White, a director of the UK Shareholders’ Association and a veteran campaigner against what he regards as excessive boardroom pay. He believes that running a company in a way that does not harm the environment, the workforce or society is already part of a CEO’s job and should not call for additional payment.

“If you’ve got an executive who won’t behave well unless you give them a bonus, should you really have them managing our companies?“ he asked.

White argues that ethical bonuses could even prove counterproductive. In seeking to achieve ESG goals, the executive will be motivated by money rather than an innate desire to be a good corporate citizen. The fact that there is money riding on the attainment of these goals might lead employees to cover up the company’s ethical failings in order to curry favor with the boss.

Annabel Denham, director of communications of the free market Institute of Economic Affairs, also has doubts about the ethical bonus. Although she regards this as a matter for a company’s board and its shareholders, she thinks that a financial reward for good corporate behavior looks suspiciously like a ruse.

“I do think this is just an opportunity for companies to pay their CEOs more without being lambasted by social media and the public,” Denham said.

Executive pay hikes are much easier to defend when they’re tied to a worthy cause.

“I do think this ethical bonus is quite a neat way for businesses to deflect criticism,” she said.

Criticism of executive pay has ebbed and flowed in Britain over the past three decades. In spite of the political controversy and the occasional shareholder rebellion, the overall level of boardroom remuneration has continued to rise inexorably with the average pay for the CEO of a top 100 company in the U.K., now reaching more than $5 million a year and diverging ever more widely from the average worker’s pay.

“CEO-to-worker pay ratios have been increasing year on year. They now average about 200 to 1,” said Simon Rawson of ShareAction, which campaigns to make investment a force for good. “So the CEO earns 200 times the median worker’s salary,” Rawson said.

The equivalent figure in the U.S. is more than 260. But while Rawson thinks executive pay is too high — exacerbating inequality and threatening social cohesion — he doesn’t object in principle to the ethical bonus.

“I think that targets which incentivize sustainable behaviors by companies is not in itself a bad thing, as long as they are linked to the right targets,” he said.

Roger Barker, director of policy and corporate governance at the Institute of Directors, which represents British business leaders, agreed.

“Running a successful business, especially over the long term, is dependent on much more than aiming at financial success,“ he said. ”You need to build these ESG-type of criteria into the performance metrics of remuneration plans.”

But why do executives need to be paid extra for doing the right thing?

“It’s a matter of incentive,” he said. “The reason for having these additional incentive plans is to really incentivize management to achieve certain objectives. Financial incentives really do matter. They affect behavior,” Barker said.

But critics complain that executives are, in effect, marking their own homework. The board gets to massage the targets to make them easier to achieve and to ensure that the bonus will always be paid. The critics say that if executives want to show how ethical they really are, the best place to start would be scrapping the company’s ethical bonus.