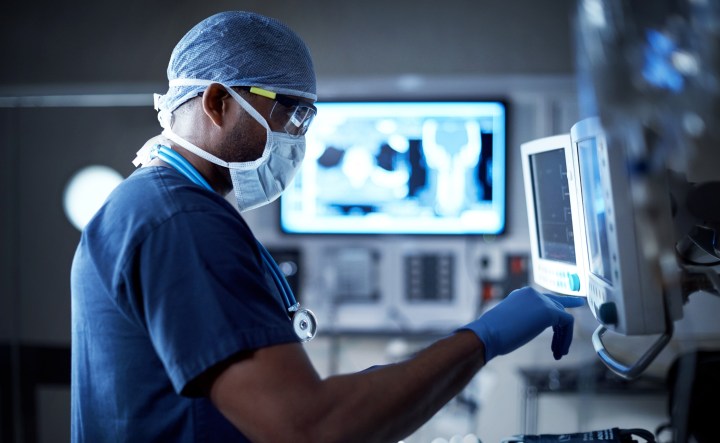 A surgeon looks at a monitor in an operating room. shapecharge/Getty Images
I've Always Wondered ...

A surgeon looks at a monitor in an operating room. shapecharge/Getty Images

With ever-increasing healthcare costs for American businesses and workers, why don’t we see greater support for a single-payer healthcare system from the business community? It seems to me that American business is at a disadvantage to foreign competition that doesn’t have to provide health care to its workforce.

The U.S. has the world’s most expensive health care system. In 2019, health care spending reached nearly $4 trillion, according to the Centers for Medicare & Medicaid Services.

Medicare for All, a single-payer health care proposal, has recently grown in popularity in the U.S., backed by progressive lawmakers like Vermont Senator Bernie Sanders and Massachusetts Senator Elizabeth Warren.

In a single-payer health care system, a single entity — likely the government — pays for medical costs, as opposed to people having to pay for medical expenses through their employer or the open market.

A 2020 study in the journal PLOS Medicine found that a single-payer health care system would save money for the U.S. or individual states over time. Savings from a simplified payment administration and lowered drug prices, among other mechanisms, ranged from between 3% and 27% during the first year, according to the researchers’ economic models.

Employers ended up paying 67% of medical premiums for family coverage plans in March 2020, and contributed an annual average of almost $14,000 per family, according to data from the Bureau of Labor Statistics.

Despite the costs of health care, our current system is advantageous for some companies. Chad Stecher, an assistant professor of health economics at Arizona State University, said big tech companies like Amazon or Facebook can attract star talent by offering compelling benefits, including health care.

“It’s in their interest to preserve that advantage over upstart companies that certainly won’t be able to compete with them on health insurance,” Stecher said.

William Hsiao, an emeritus professor of economics at the Harvard T.H. Chan School of public health, said that industries employing younger workers, like the tech industry, are more likely to be opposed to single-payer health care because the health insurance premiums of those workers tend to be lower.

With the uniform payroll tax of the single-payer system, Hsiao said, industries will probably end up paying more than they currently do.

For a sense of that: A California Senate committee in 2017 found a single-payer plan in the state would cost $400 billion a year, which could be paid for with a 15% payroll tax.

Another reason some companies are against a single-payer system simply has to do with ideology, Hsiao said — many believe the government should just “stay out of it.”

Then there are the businesses without a position on single-payer, which Hsiao said he thinks are in the majority. Hsiao said these companies think they don’t have anything to gain from the implementation of the system — that workers would probably demand higher pay if the company wasn’t covering their health insurance.

But a single-payer system might have certain advantages for companies. “Health insurance is a nightmare for everyone to negotiate. Employers are no exception,” Stecher said. “Our system forces everyone into becoming experts at some level in this area that is, honestly, a waste of time for most companies to spend effort thinking about.”

Some American manufacturers, like General Motors Corp., have said that they’re at a disadvantage compared to foreign companies, as listener Brandon Haase pointed out.

”The cost of health care in the U.S. is making American businesses extremely uncompetitive versus our global counterparts,” said the then-chairman and chief executive of GM, G. Richard Wagoner, Jr., back in 2005.

While big companies have generally refrained from explicitly and publicly advocating for a single-payer health care system, there are CEOs at smaller companies expressing support for it. The Business Leaders for Health Care Transformation coalition, for example, supports a health care system that covers everyone “regardless of their income, background, or job status.”

Members include leaders from companies like Ben and Jerry’s; MCS Industries, which supplies frames and wall décor to retailers; the brewery Alchemist Brewery; and MicroTrap Corp, a manufacturer of air filtration equipment.

Jen Kimmich, the chief executive and co-founder of Alchemist Beer, said handling health insurance costs for her employees has been one of the company’s biggest challenges.

“I think businesses are just starting to realize how much of a drain it is,” Kimmich said. “For us, if we could focus on our business and not spending so much time and so much money navigating health insurance, we could just invest more in our community and our business and everything else.”

Kimmich added that many of her employees, afraid of going to the doctor because of what insurance policies do not cover, are using insurance less. “The copays, prescription drugs, everything. There’s so much that isn’t covered.”

Kimmich said the company provides full health insurance coverage to its employees through Blue Cross Blue Shield of Vermont. Alchemist Beer currently has 42 full-time employees, with about six who are doing half-time. (Prior to the COVID-19 crisis, 50 worked full-time). In total, she said the company is paying about $350,000 on an annual basis for all of its employees’ health insurance.

She’s in favor of a Medicare-for-All-type program, which she said could pay for all of those costs, along with dental and vision.

David J. Steil, the chief executive of MicroTrap Corp. and a former Republican member of the Pennsylvania House of Representatives, is also in favor of a single-payer system.

“I have two motives: one is to get business out of healthcare. I don’t think it is our responsibility. It is detrimental to the nature and the mission of our businesses,” Steil said. “Number two is: I’ve come to realize that everyone should have health care. Under any circumstances, everyone should be covered in one way or another.”

Steil said Business Leaders for Health Care Transformation talks to business people all the time, and single-payer has been a tough sell because they distrust the government. But, he pointed out, the government is already providing half of the health care in this country when you take into account programs like Medicare and Medicaid.

“Our prejudices and our ideologies prevent us from even considering it,” he said. “And that’s the biggest fight we have to overcome.”