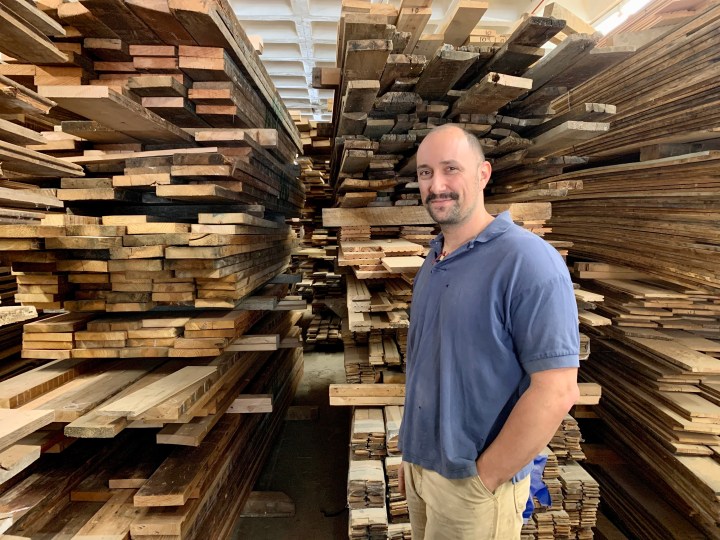 It smells good inside the warehouse of Brick + Board in Baltimore, like freshly cut wood — only the wood itself, stacked floor to ceiling on one side of the shop, isn’t so fresh.

“We’re taking old wood, materials that we’ve salvaged from buildings that are 100, 200, sometimes close to 300 years old, and processing it so that it can be used for another 100 years or so,” said owner Max Pollock.

A lot of the wood the six-year-old company sells comes from right here in Baltimore, where hundreds of vacant and abandoned houses are torn down every year. Workers then “take the nails out of it, clean all the dust and the century of grime and crap that accrues on it,” Pollock said. Once that’s done, he said, “we have our circuit of machinery, we run it through, turn it into flooring or wall paneling or tabletops or what have you.”

Every month, through a partnership with the U.S. Forest Service, a truckload of that wood is sold to the high-end furniture retailer Room & Board, where it’s turned into pieces like the McKean console table, named for a street of demolished row houses in West Baltimore. Price tag: $1399.

Pollock also salvages wood from old barns and industrial buildings. One stack of floorboards, coated in clay dust, came from a pottery factory. The factory was probably 100 years old, but the boards are old-growth redwood. Pollock counted 330 rings in one seven-inch piece.

You can’t really log wood like this anymore, and recovering it takes a lot of labor and energy, which is why it’s typically more expensive than new lumber. But as new lumber prices have soared during the pandemic: “We’re seeing people who never would have considered this because of the price,” Pollock said. “Now, you’re paying a little bit more for something that’s a lot more beautiful.”

That sold carpenter Josh Dean on some white oak from Brick + Board. He’s building an outdoor bar for Le Comptoir du Vin, a local restaurant and wine shop, and was planning to use lumber from Home Depot. Then he priced it out.

The bar is a side gig. Dean’s main job is building pipe organs. “I was very happy, as a woodworker, to not have to use two-by-fours,” he said. The white oak is, he said, “just a better-looking wood.”

Business is also up a few miles away at Second Chance, which sells reclaimed lumber and architectural salvage out of its massive warehouse. Many of the workers were once incarcerated and are getting a second chance themselves.

Though the warehouse cut back its hours during the pandemic, its lumber sales are up about 35% since the start of the pandemic, CEO Mark Foster said. “We’re doing that kind of volume in four days instead of seven,” he said.

Second Chance is a nonprofit and can sell for lower prices than big retailers.

“We tend to be about 30% to 40% below Home Depot, and we adjust accordingly,” said Foster. “Over the last year, we’ve had to adjust a lot, and that’s mostly been up — that’s all been up, as a matter of fact.”

“We don’t have the contractors, you know, the big builders, coming in here yet, but we do get a lot of the smaller contractors,” he said. “We are getting a higher level of contractor on a pretty regular basis asking for special projects where they can use our stuff.”

The question is whether they’ll keep coming if the price of new lumber comes down. Brick + Board’s Max Pollock said he hopes “people might still be drawn to this, not because of price, but because of beauty, because of history, because of character, because of the story attached to it.”

A return to normal prices in the new market might even help the market for old wood. Another longtime seller said if builders don’t have to spend so much on the framing you don’t see, they’ll have more to spend on the decorative details you do see.