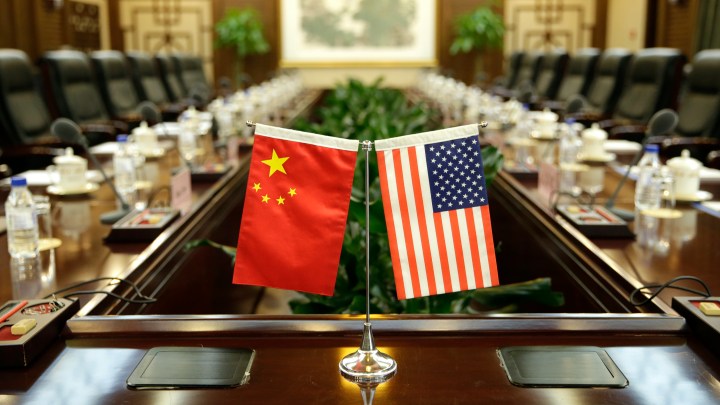 COPY
There are rules that companies around the world follow so their devices can work together and compete together. The U.S. and China have both become increasingly aggressive in trying to influence these rules. Jason Lee/AFP via Getty Images

There are rules that companies around the world follow so their devices can work together and compete together. The U.S. and China have both become increasingly aggressive in trying to influence these rules. Jason Lee/AFP via Getty Images
Listen Now

The U.S. and China have been in competition and confrontation in arena after arena. On trade and tariffs, over islands in the south China sea, over human rights. And in another, slightly more obscure arena: international technological standards.

These are the rules that companies around the world follow so their devices can work together and compete together. From HDMI cables to complex 5G cellphone standards, if something’s going to work around the world, the world has to be on the same page.

“Technical standards ensure you can use your device anywhere around the world and it’ll work,” said Naomi Wilson, a vice president with ITI, a tech trade association representing around 80 of the world’s major tech companies.

The way these standards are decided is largely by the companies themselves, through different organizations like Wilson’s. “It strikes people as a little odd because companies are inherently competitive, the notion that they would also cooperate and build consensus can seem a bit ironic,” Wilson said.

Yet they do precisely that. “Your network is only as good as how many people can get on the network,” said Melissa Newman, a vice president at the Telecommunications Industry Association, another standards-setting organization. The more widely accepted a standard, the wider the possible market for a device.

Companies get together at meetings arranged by standards-setting groups and their representatives — engineers, technical experts — debate different tech standards, and vote on what the standard should be. The decisions are typically consensus-based and voluntary.

If the standards that everyone likes happen to be based on patents that a particular company came up with, well, that’s pretty great for that company.

“A great example would be your cellphone,” said James Lewis, director of the strategic technologies program at the Center for Strategic and International Studies. “In the 3G cellphones, European companies came up with the standards and it was a huge boon to those companies, an immense source of wealth.”

Nokia and Qualcomm, for example, earn billions per year in royalties because competitors use standards they came up with.

Here’s where the controversy starts.

“The Chinese realized the values of standards and decided to capture them,” Lewis said. China’s government started to increase Chinese participation in these global standards organizations.

“They flood the meetings,” Lewis said. “There might be five Chinese experts for every non-Chinese expert.” With decisions being consensus-based and voluntary, rather than one person-one vote, this doesn’t in and of itself guarantee Chinese standards will beat others.

Chinese companies have also contributed large numbers of patents for proposed standards. Huawei contributed more proposals for 5G standards than any other company in the world. Even so, experts caution, the number of proposals does not necessarily translate into number of standards accepted.

China is developing a 2035 standards plan which its leaders have described as allowing it to “surpass the world.” Lewis said China has also tried to move responsibility for standards-setting to government bodies at the United Nations, where it has more influence, and at times has politicized the decision- making process.

“There’s been some instances where Chinese firms seem to be giving in to pressure from the Chinese government and the Chinese public to support Chinese standards, even if they thought other standards were the better ones,” said Adam Segal, director of the Digital and Cyberspace Policy program at the Council on Foreign Relations.

To some, China’s assertiveness on standards represents an economic and security threat. Officials from the U.S. to Japan have been suspicious of China’s intentions, concerned that Chinese standards might support its state security apparatus. To others, it seems “pretty normal,” said Segal. “It’s normal that the Chinese companies would want to be in this space.”

Segal said it’s not entirely out of the ordinary that the Chinese government is being assertive ¸ European governments also get actively involved in promoting their own standards, he said, more than the U.S. government does. “It’s just the scope and scale of it, in the Chinese case, has caught people unaware and surprised,” he said.

In response to U.S. pressure, some standards-setting organizations have kicked out Chinese firms. That’s pushed some companies to create separate Chinese tech standards, which is a serious backfiring of U.S. policy, said ITI’s Wilson.

“What industry does not want is China staying home and creating its own brand of China-unique standards. That causes a myriad of problems,” she said. “In particular, including market access barriers, but also the potential to influence the broader Asia region in terms of Chinese standards having an advantage in the Chinese market —because Chinese companies are the leaders there and therefore foreign companies that are required to adopt Chinese standards in order to get into the market are at an inherent disadvantage, and are playing catchup.”

Another unintended consequence of U.S.-China trade policy has come from the blacklisting of several Chinese tech firms. It means U.S. companies can’t do business with them, and some U.S. businesses are concerned that means they can’t work with these companies to set tech standards, either. “Companies still remain unsure about whether they can or cannot fully participate in these global standards discussions,” said Patrick Lozada, director of global policy at TIA.

The government could fund or incentivize companies of all sizes to engage more. As the saying goes, if you aren’t at the table, you’re on the menu.