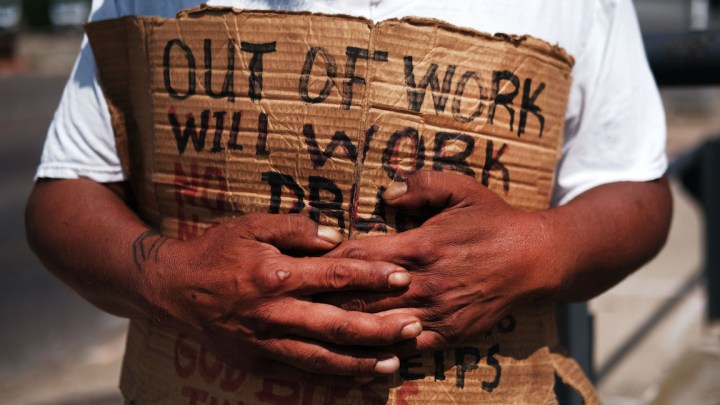 COPY
Even as the U.S.' GDP improves, it'll take a while for that to have an impact of jobseekers, if it ever does. Spencer Platt/Getty Images

Even as the U.S.' GDP improves, it'll take a while for that to have an impact of jobseekers, if it ever does. Spencer Platt/Getty Images
Listen Now

The U.S. Commerce Department announced Thursday that in the first quarter of this year, GDP, or gross domestic product, grew at an annualized rate of 6.4%. That is the fastest pace for a quarter since 1984.

Personal consumption increased at an annual rate of 10.7%. All of this indicates the economy is very close to where it was before the pandemic in terms of GDP, said Paul Ashworth, chief U.S. economist at Capital Economics. “Within 1% now. So yeah, pretty close indeed.”

Yet where we were a year ago is not where we would be now if the pandemic had never happened. But, Ashworth added, we’re pretty close to getting there too: “We’ve still got about 2% to make up to get back to that pre-virus path.”

Not only do economists say we are going to get back to where we would have been, we’re going to do even better.

According to Constance Hunter, chief economist at KPMG, “we’ll probably reach it in the third quarter of this year and beat it in the fourth.”

She said that by the end of the year, GDP will likely be 1.5% points higher than if the pandemic hadn’t happened.

American consumers have $2 trillion in savings, which is likely to boost the economy as they spend it over the next few years. Business investment is up 9% year over year. All of this news sounds great, and it is great, but it’s not getting Paula Engelking her job back.

“I have applied for permanent, full-time work, and I’m just not getting it,” she said.

Engelking is 55 and worked in TV production and writing in Minnesota’s Twin Cities area at the beginning of the pandemic. She was laid off in July and hasn’t been able to find anything since. Now she might stop looking.

She said, “I have friends who say, ‘You know, Paula, you may not be able to get another full-time job.'”

Engelking is not alone. We’re still 8 million jobs short, lost from restaurants near office buildings, convention centers and more. We don’t know what’s going to happen with them.

“There’s reasons to believe that there will be significant structural change in where we live and how we work,” said Susan Houseman, an economist with the Upjohn Institute. “And that’s going to affect a lot of people.”

The economy we get after the pandemic is not the one we had going into it. It will take some time for the human part of the economy to adjust, and that’s not reflected in the GDP statistics.