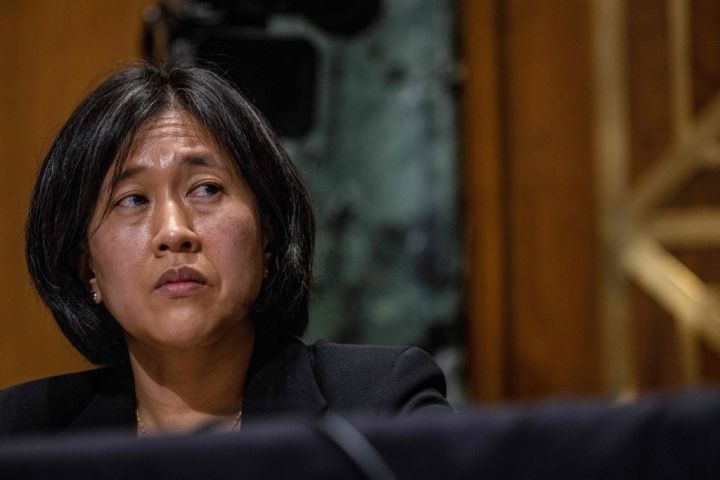 For decades, global trade has prioritized efficiency over resilience and our environment, leading to what many call a race to the bottom. According to U.S. Trade Representative Katherine Tai, that needs to change.

Tai spoke with “Marketplace” host Kai Ryssdal. The following is an edited transcript of their conversation.

Kai Ryssdal: So let’s pick up with the theme of Earth Day, climate change, the president’s summit. And I want to ask you about a speech you gave, I don’t know, a week or so ago in which you made it pretty clear that you think trade policy is really, really closely aligned with environmental policy. And I want to ask you how you get that done in a global trade environment where all the incentives are cheaper, faster and not necessarily environmentally friendly.

Katherine Tai: Well, you ask an excellent question, which is, you’re right. The trade rules that have been handed down to us are ones that incentivize what we call a race to the bottom. I think what we’re witnessing right now is a real recognition on the part of governments, on the part of stakeholders, even our companies — the ones who make the decisions about where they’re going to produce — that our system needs to have built into the incentives concern for resilience, beyond efficiency. And that our environmental changes and the climate crisis is itself a condition that we need to work through as a resilience concern.

Ryssdal: How though, ma’am, do you incentivize — let’s, let’s flip the paradigm, right? The current incentives are for a race to the bottom. How do you incentivize a race to the top, right? Where companies are — forget rewarded — but not penalized for doing things that might make a product more expensive or take a little bit more time when that just ain’t the way the global economy works?

Tai: I hear you. But I think that is the way the global economy needs to evolve. We need to build in incentives. And when we talk about incentives, we’re talking about carrots and sticks. So in some ways, what we need to do is figure out how we need to re-devise those carrots, maybe the shape of the carrots, when they’re applied. We need to look at the sticks in terms of how to enforce. We also want to be taking a look at rules that were devised when our world, frankly, looked and operated differently, and maybe think about where those rules need to be tightened or loosened.

Ryssdal: All right, let me tick off another couple of things on my list here. My guess would be that if you went to almost any town in America today and asked 10 people on the street what they thought of trade policy, 9½ of them would say, “Oh, you mean tariffs?” And I say that because of course for the last four years in this country, trade policy was tariffs. Obviously, we’re speaking about President [Donald] Trump and his trade war with China and other countries as well. I wonder how you recalibrate the conversation around trade in this economy to some kind of equilibrium, moving away from the Trump doctrine on trade, which was, as you know, isolationist and bilateral at best, but often, as you know, America alone.

Tai: Well, let me say this, and I’m someone who really prizes a constructive outlook on life and in policymaking —

Ryssdal: And yet, you’ve been doing trade policy for 25 years.

Tai: You know, it’s really necessary to stay in this business. But let me put it this way, if we do go out and interview 10 Americans across our country and ask them about trade policy, and they come back with the word and the idea “tariffs,” that means that Americans are thinking about trade policy, and they’re thinking about how it affects their lives. And I think that that is a good thing. In my mind, the task that we have before us now is to make the case to America, to you know, our largest economic stakeholders, but also to the individual and community levels that when we are formulating our trade policies, we have the American worker, who is part of a community, in mind. And that we are formulating policies that we have designed to benefit that regular American.

Ryssdal: Superquick, I do have to ask you why the president — for all of his differences with Donald Trump — seems to be aligned with him in keeping our tariffs on Chinese imports in place?

Tai: I think that we could have another 30 minute conversation about the U.S. trade relationship with China.

Ryssdal: You know what, I’ll tell you what, actually let’s. We’ll book that right now after we get off the phone because honestly, that’s the most important trading relationship on the planet. But anyway, briefly, go on.

Ryssdal: Last thing, ma’am, and then I’ll let you go. I want to go back to that speech from a week or so ago that you gave about trade policy and environmental policy. And one of the things you said was: “My job is to push for trade reforms that translate into meaningful change in the lives of farmers, ranchers, factory workers, parents and children, not just in the United States, but around the world.” And I wonder whether you thought twice before you wrote that and you said that because to some in this country, that’s going to clang a little bit.

Tai: Really, why is that?

Ryssdal: Well, I think at this moment where we are a deeply polarized society, the idea that the United States trade representative would be worrying about workers, farmers, children and students in countries other than the United States might be problematic for some.

Tai: We don’t exist in a vacuum. And, you know, all you need to do is take a look at a map. We are all inextricably linked to each other and we are sharing this planet as a home in terms of climate and COVID-19. These are collective challenges, and we only get through them if we can get through it collectively.