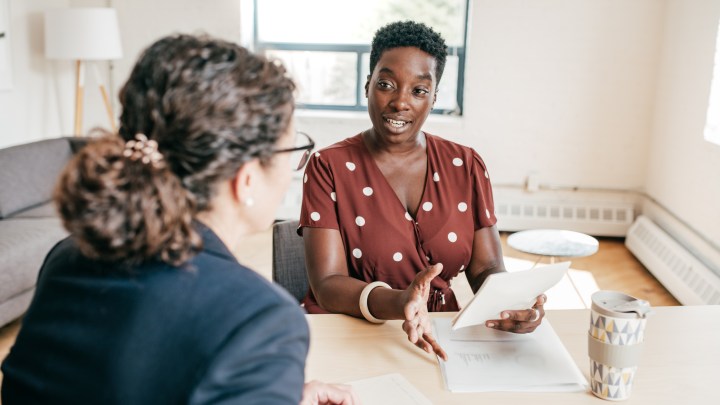 COPY
Black Americans who didn't grow up talking about investing are now able to pass on information they never had to their own friends and family. kate_sept2004 via Getty Images
COVID-19

Black Americans who didn't grow up talking about investing are now able to pass on information they never had to their own friends and family. kate_sept2004 via Getty Images
Listen Now

A lot of Black Americans under the age of 40 started investing in the stock market during the pandemic.

That’s the conclusion of a new survey from Charles Schwab and Ariel Investments: 30% of Black investors under 40 got into the market for the first time in 2020, according to the survey.

One night last spring Rachel Tooley was scrolling Instagram, and she stumbled across a story from some random guy about stocks and investing.

“That night, I think I spent like four or five hours going through like every post he ever made, because he made it so relatable,” said Tooley.

Tooley already knew about stocks. She works for Apple in Atlanta, and she gets shares a couple of times a year. “But every time I got them, I would just sell them just to get the money.”

But when she came across that random post that sent her down a rabbit hole? The pandemic had just started and she’d just broken up with her boyfriend.

“And so I got all that time back to myself. And I was just like, well, I’m about to try to do something with this time,” Tooley said.

That something has been investing.

Part of the reason that more young Black Americans are getting into the stock market for the first time is because it’s gotten much easier to invest, online and for free, according to John Rogers Jr., chief investment officer at Ariel. “But also I think what’s happened this last year, of course, was this extraordinary rise in the stock market in general.”

Which he said generated a lot of interest from people who’d never invested before.

Overall, Black Americans are still less likely than white Americans to have money in the market. But, for those under 40, there’s no longer a gap. Which is a big deal, Rogers said.

“Because of the way that African Americans came to this country and the segregation that we faced, and all the other challenges that we face, we are so far behind in this race. And when you don’t have multigenerational wealth, you get further and further behind,” he said.

And because Black families have so much less generational wealth, Rogers said, historically, they haven’t talked as much about how to build wealth.

But, that is changing, too.

Nearly 40% of Black Americans surveyed say they talk about the stock market now versus just 10% who did growing up.

Tevin Geter said he never did. “My family and my friends, like, they’re living paycheck to paycheck, so there’s not a whole lot of excess money to put into a savings account, let alone a brokerage account.”

But in the last year, Geter, who’s 27 and lives in Nashville, has taught himself a ton about investing. And now he’s trying to share what he’s learned with his family and friends.

“If I can be that person that’s able to plant these seeds in other people’s lives then it wouldn’t make sense for me to not at least try,” he said.

Because, Geter said, just a year in, investing has already changed his life. It’s allowed him to quit one of the two jobs he was working before just to get by.