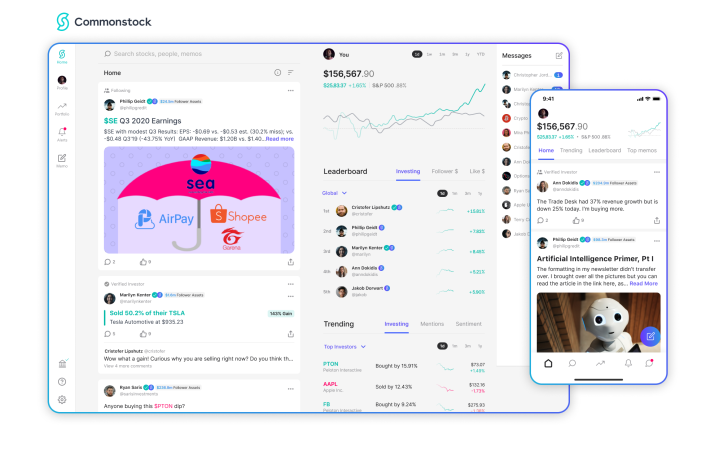 Startups that promote apps allowing users to share investing information have been cropping up, and many are geared toward young people who are looking to get involved in the stock market — some of them for the first time.

According to a survey from Charles Schwab, 15% of current U.S. stock market investors say they began investing in 2020.

Market participation in the pandemic is growing as people with more time at home and savings look to cash in on wealth-creation opportunities, according to David McDonough, founder and CEO of the app Commonstock. The social platform enables investors to share information about their holdings and market news.

“When young people got stimulus checks, the popular thing to do was invest it,” McDonough said. “That’s a remarkable, transformational change in society.”

McDonough spoke to “Marketplace” host Kai Ryssdal about the rise of social trading apps and young investors’ participation in the stock market during the pandemic.

David McDonough: When I step back, you know, that growth rate can’t persist forever. You know, it’s a cyclical, sort of breathing thing, where there was a lot of excitement in January, the market has cooled off in the short term, but it will come roaring back in terms of participation. And that’s healthy. That’s a good thing.

Kai Ryssdal: I guess my point, though, is that it is kind of cyclical. And if you and I had this conversation, 15th of February last year, right before the bottom fell out, you know, it would have been a different kettle of fish, as it were.

McDonough: Yes. I mean, I think there’s some historical context that I need to give, right, where, you know, I got started in 2008, at the very bottom of the financial crisis, right? And over the decade, since everybody sort of in my age group watched this 10-year-plus, you know, bull run. So the moment the market actually plummeted in March, that’s where you saw this influx, this flood of people who’ve been on the sidelines, who kind of missed the last run, who are now saying, “This is my time to, you know, jump in and participate in the next wealth-creation opportunity.” And that’s where we are today.

Ryssdal: So what is your guess on what market participation looks like coming out of this pandemic? If we’ve got a bunch of younger people piling in now, do you think the percentage of people actually actively in the market is going to increase substantially?

McDonough: When young people got stimulus checks, the popular thing to do was invest it. That’s a remarkable, you know, transformational change in society. And so it’s really interesting to see, especially the acute event that happened in January, you know, this old adage of invest in what you know. Well, young people know memes, and they know internet culture. They know that their friends all like Peloton, and they’re discovering their force as the most meaningful market participant.

Ryssdal: But are memes and internet culture a good, solid long-term investing strategy?

McDonough: Well, for sure, this is actually what Commonstock is looking to improve because it’s great that everyone’s on Reddit talking about markets and investing. I want to harness this energy for, I guess, a little less risky and positive outcomes, if that makes sense.

Ryssdal: Yeah, it does. What I hear you saying is we need some guardrails, right? Because, look, as we learned with GameStop and some of the more unfortunate episodes there, this can go bad in a big, bad hurry.

McDonough: Depends on the definition of “bad.” You know, one of the things that I think is really valuable, especially for younger investors, is to get exposure to the risks and learn that powerful lesson. Then it sticks with you for life.

Ryssdal: Yeah, but if you lose the rent money when you’re 23, that’s gonna be a tough month for you.

McDonough: Certainly. And by the way, I actually would caveat this with, the vast majority of people are actually not really taking, you know, these superrisky bets like that. The more common outcome is they will put money in some things that are more safe, sometimes more risky. And actually, this is the value of losing an investment at 23. You don’t lose it at 33, when you have two kids and a mortgage, where it’s way more damaging.