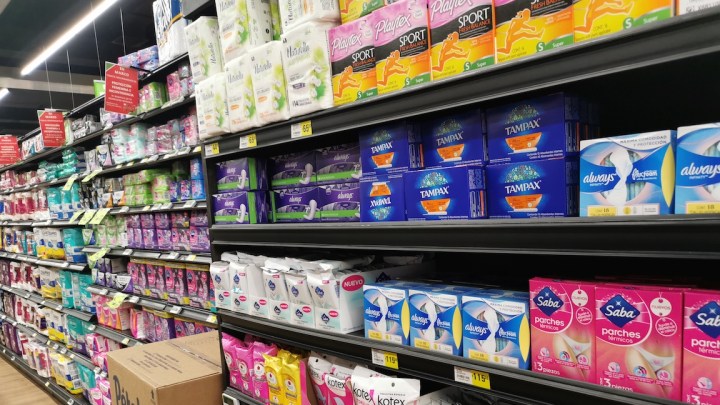 COPY
Shelves filled with female sanitary products in Mexico City show no tampons as a result of the single-use plastic ban restricting them. Rodrigo Cervantes

Shelves filled with female sanitary products in Mexico City show no tampons as a result of the single-use plastic ban restricting them. Rodrigo Cervantes
Listen Now

This year, Mexico City started a new phase of its single-use plastic ban. The law now forbids these, among other plastic products: straws, coffee capsules and tampon applicators. The ban on applicators has raised questions about women’s access to female sanitary products, creating tensions among businesses, feminists, environmentalists and the government.

“Menstrual products, including tampons, are contributing to the pollution of our environment,” said Ornela Garelli, who works for Greenpeace Mexico on consumption issues.

Garelli said there’s no data showing how much female sanitary products contribute to pollution, but the nonprofit sees the products as similar to disposable diapers, which account for almost 7% of waste. She also said the government should take more steps to ensure women have access to alternative products. And she said the plastics industry should have developed other options.

A feminist nonprofit group fighting taxes on menstrual sanitary products opposes the ban on plastic tampons. The group, Menstruación Digna, said these products should be free for low-income women.

“The law has no gender perspective,” said Anahí Rodríguez, the group’s spokesperson, speaking in Spanish.

She said tampons are the best choice for many women, while environmentally friendly choices, like menstrual cups, are expensive and rare.

“The industry is not against regulations, but the government didn’t give us enough time to develop alternatives to single-use plastics,” said Susana Hernández, technical manager for ANIPAC, Mexico’s National Association of the Plastic Industry, speaking in Spanish.

Hernández said the plastic ban has resulted in business closures and layoffs.

“According to data collected by Mexico’s Congress, female sanitary products can cost up to 8% of a woman’s income,” said Martha Tagle, a congresswoman who opposes the ban on plastic applicators as well as taxes on menstrual products, speaking in Spanish.

She said taxes on those products provide the equivalent of about $143 million annually to the government, while jewelry and magazines are tax-exempt.

But the congresswoman said the plastics ban, and the way it affects women, show there is still much to be done.