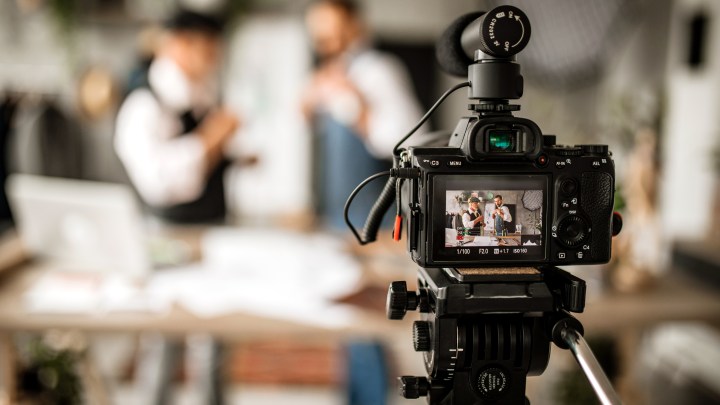 COPY
Many businesses are able to use livestreaming as an inexpensive and direct way to reach customers. hobo_018 via Getty Images

Many businesses are able to use livestreaming as an inexpensive and direct way to reach customers. hobo_018 via Getty Images
Listen Now

On a recent morning, celebrity chef Matt Adlard was whipping up some sweets on Amazon Live, which allows sellers to hawk Amazon products in live, interactive videos.

“We’ve got a vanilla-and-orange whipped ganache, and we’ve got a chocolate-hazelnut coating,” he told his internet audience — which included me. Adlard was showcasing kitchen items for sale on Amazon. I clicked to “follow” him.

Adlard poured his batter into a square pan. I needed one of those, I realized, so I typed in the chat: What makes a good square pan?

“Scott, that’s a great question. So the baking pan I’ve linked in my shopping carousel pretty much has all the features you want. But you really want one with a loose bottom,” Adlard advised.

As he talked, a pan popped on the Amazon screen. Convenient. I saw suggestions from other livestream shoppers:  “Get the removable bottom,” one said. “I use springform,” added another.

Is livestreaming the next big thing in retail? It’s already big in China, where two-thirds of shoppers say they’ve bought something this way.

In San Francisco, Kurt Workman is trying it out. He’s co-founder of the baby products company Owlet, and says his initial marketing strategy — just ads, no videos — failed.

“We thought, ‘Oh, we can just bid on Google ads and people will click on our ad and then we’ll sell product,’” he said. “It turned out to be a horrible strategy.”

So Workman’s company tried livestreaming on Amazon, which didn’t cost any extra money. Online, he didn’t just talk about his products, which track baby heart rates, but also the company’s story.

“We actually started Owlet right before my oldest son was born,” he said during a livestream session. “And we were worried that our kids would have a congenital heart defect that runs in our family.”

The livestream did so well in sales and views that its products rocketed up Amazon’s search engine ranking. Workman says shoppers got real-time service.

“You have an awkward human being talking to a camera and interacting with an audience. But you’re able to close the loop on a lot of questions,” he said.

In the U.S., one livestreaming app, TalkShopLive, saw sales grow by seven times during the pandemic. Another, Comment Sold, saw a 50% jump in spending per viewer. Livestreaming is also employed at the wholesale level, between brands and retailers.

“For brands, you need to remember, all the trade shows are closed, New York fashion shows were down,” said Mark Yuan, co-founder and CEO of New York-based livestreaming consultancy And Luxe. “They need to do wholesale business, and make sure their wholesale accounts survive.”

Yuan adds that livestreaming “was going to happen in the U.S., with or without the pandemic. It was only a matter of time.”

There are many new players in the emerging livestream shopping space. But according to Abigail Holtz, founder of the online fashion shop The Lobby, the idea of hawking stuff through online video is not new.

“Some of the stuff that we see today, and we think is new and innovative, was actually starting to happen over a decade ago on YouTube,” she said. “You know, people doing make-up tutorials.”

Today, Holtz said, Millennials and Gen-Z shoppers are demanding video content that’s authentic. “They’re really allergic to being sold to,” she said. “So they want to know, what does this look like on real people? They don’t want it to be overly produced, overly photoshopped.”

“They don’t want it to be overly produced, overly photoshopped.”

Many analysts think early livestreaming in the U.S. will grow in fashion and beauty, product categories with high profit margins where there’s money to try video. And sales of these products depend on the kind of human interaction that livestream shopping can provide.

Otherwise? “The journey is cold. There is no emotion. No interaction,” said Diaa Elyaacoubi, CEO of the online fashion site Monnier Frères in Paris. “And sometimes you cancel the process because you are bored.”

When the pandemic came to France, Elyaacoubi’s team began livestreaming to China, where the economy was reviving. She says shoppers in Asia tend to join livestreams to ask specific questions (what color, what size), whereas Western consumers come for a show. “Westerners, they need to be seduced,” she said.

But livestream sellers are still learning. Deborah Weinswig, founder of Coresight Research, says things can go wrong on the screen with celebrity marketers known as Key Opinion Leaders, or KOLs. “I mean, there are big mistakes that happen, right? You know, the KOLs say the wrong brand name. And it’s live, so it’s not like you’re rewinding,” Weinswig said.

So far, no dominant livestream app or website has emerged in the U.S. Facebook and Instagram are trying to be that. And Weinswig is watching QVC — an early shopping channel from the era known as television. “Hey, maybe you heard it here first, right? Holiday ‘21 should be the breakout year for livestreaming here in the U.S,” she said.

But in order to break out on the order of China’s livestreaming scene, analysts say North American consumers need to get more comfortable shopping from phones and other mobile devices, the way Chinese shoppers already are.

“They have leapfrogged us, and most people operate using mobile in Asia,” said Karen Wong, co-founder and CEO of retail consultancy TakuLabs. Meantime, live web interaction in the United States lagged. “We know how hard it was for most of us to get on Zoom at the start of the pandemic,” Wong added.

While beauty and fashion products receive much of the attention in the livestream industry, Wong said low margin industries will likely not have enough profit to try video, while other sectors have yet to migrate to online sales.

“The average pet store has 20,000 products, but they have no pictures,” she said. “If you don’t have pictures, how can you go online?”