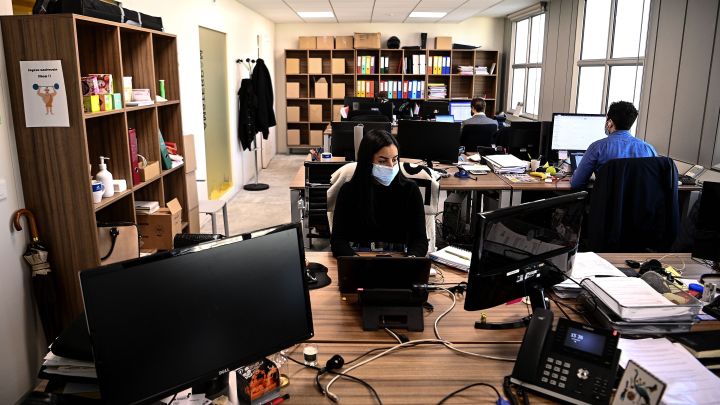 It’s been about a year now since millions of workers left the physical workplace for a virtual one. Figuring out a whole new way to work has been complicated, especially for folks who’ve never really been in a workplace at all. Learning on the job, as many young people do through internships or apprenticeships, has become a whole lot more challenging with remote work.

In those halcyon early days of 2020, Washington University student Laura Glanz was dreaming of how she’d spend her summer: She wanted to intern at the famous ad agency Ogilvy in Manhattan.

“I was really excited,” she said. “I had visited the Ogilvy office when I was in New York. It’s just this beautiful skyscraper, and I absolutely love it there.”

She envisioned renting a little apartment with some friends, taking the subway and dressing to impress — the whole “Mad Men” fantasy.

“I’ve actually never watched it,” she said. “I know I have to.” To be fair, she was 8 years old when the show was on.

But by spring her New York dreams had come crashing down like Don Draper from the 37th floor of the Time & Life building. She did get the Ogilvy internship, but instead of a skyscraper, she did it from the bedroom of her apartment in St. Louis, in a much baggier, comfier wardrobe.

“Rather than working hands on with clients, we had these virtual sessions, which were kind of more like teaching sessions,” she said.

Turns out learning lessons about the workplace is a lot harder when there is none.

“There’s no observation, really, there’s no serendipitous contact. That was lost,” said Marianna Savoca, assistant vice president for career development and experiential education at Stony Brook University, which opened a new center last year to develop best practices for remote internships. She said without opportunities to casually network at the coffee machine or listen in to discussions across the office, remote internships need to be more directed.

“There has to be far more frequent and structured communication that covers not just the work product, but it also covers the corporate culture,” she said.

“We knew that we needed to really focus on the apprentices who may not have had experience really being a digital worker before,” said Pallavi Verma, a Senior Managing Director at Accenture North America.

The company also increased the number of regular check-ins with apprentices. “So we in some ways over tilted on the one-on-one interaction to help try to build that personal relationship,” said Verma.

“Shadowing now has to be done online,” he said. “It’s kind of just pinging someone if you need help, and then they’re always there to kind of give you that support.”

Cissoko actually prefers this format. He said he feels less self-conscious and more likely to reach out to people he’d never approach in person, “because it would kind of be really awkward. How would I start off this conversation? Because I don’t want to go off as too relaxed, but I also don’t want to go off weird, basically.”

Sending a message and connecting over video is less nerve-wracking for him.

“The person only gets to see kind of your face and basically a profile picture of you, so I get to be a lot more open,” he said.

Not having to deal with commuting has also given him time to take remote classes in cybersecurity in the evening at John Jay College of Criminal Justice. Cissoko hopes he can remain remote, even after people return to the office.

And while Laura Glanz didn’t get to live out her New York ad woman fantasies, she was able to connect with creative leaders all over the world.

“While I did grieve, I think the accessibility to talk to people, no matter where they are, has been such a great thing that’s come out of this.”