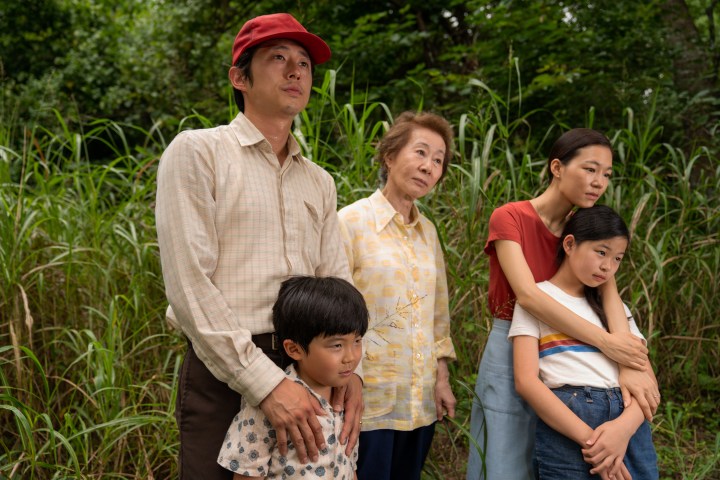 In Lee Isaac Chung’s breakout film, “Minari,” a Korean American family endures the trials and tribulations of settling into their new home — a trailer parked in a bare Arkansas field.

In this story set in the 1980s, patriarch Jacob transports his family to this rural community with aspirations of taking up farming. Jacob is optimistic he’ll be able to better provide for his family there, and he insists that with hard work on the farm, the opportunities will come. But over the course of the film, it becomes clear that the path to economic success is not quite as straightforward as he imagined.

“Minari” premiered at the 2020 Sundance Film Festival and has received several awards, including a Golden Globe for best foreign language film. The win was met with some criticism on the grounds that “Minari” was barred from competing for best picture honors.

The film was based in part on Chung’s own experience growing up as a Korean American in rural Arkansas. Chung said “Minari,” which he wrote and directed, was in part a way for him to process his own life.

“I really wanted the story to be more about the way this family finds each other through the process of seeking out success and seeking out a dream, and not so much about whether or not they’ll succeed at that dream,” he said during an interview with “Marketplace” host Kai Ryssdal. “I think that’s what I was going through in my own life.”

Lee Isaac Chung: This was a film that I wanted to make to capture a feeling I have about my family, about my history, and also what I was going through in my present day as, as a husband and a father.

Kai Ryssdal: It’s a little bit, too, about, and you said this in some other interviews, it’s about looking for the American dream in a way, right?

Chung: I guess so. A lot of the plot revolves around the father figure really pursuing this dream of farming, which I felt that me as, as a 40-year-old I was kind of pursuing my own dreams as a filmmaker and, and seeing myself in, in his work. So yeah, there is that driving the plot in many ways.

Ryssdal: You are, I want to make sure I get this right, you were about to not leave filmmaking entirely, but step away, as this film got big, right?

Chung: I thought about quitting filmmaking, just because it was becoming so difficult for me. So I didn’t know if the script would ever get made. I just thought, “I’m gonna have this script, and if my daughter can see it one day, that’d be great.” So this is all quite a surprise that life has changed so much in these past couple years for me.

Ryssdal: So are you stuck now as a filmmaker, since this one’s getting big?

Chung: I’m stuck, in a way. But I kind of reframed my thinking, where I don’t feel like filmmaking is what defines me anymore. Like, I feel like I’m much more defined by my family and other things in life that, that I feel are much deeper to me.

Ryssdal: One of those things clearly is your heritage, your family, what they went through to come here. And you’re looking at that in the process of making this film, I think, and saying, “These are interesting decisions my parents made.” And that plays out in the script as, as the mother and father in that script, kind of, you know, pursue that hopeful future.

Chung: Yeah, that’s right. I really wanted this story to be more about the way that this family finds each other through the process of seeking out success and seeking out a dream, and not so much about whether or not they’ll succeed at that dream. And I think that’s what I was kind of going through in my own life and something that I wanted to process myself.

Ryssdal: When you made your Golden Globes acceptance speech, that was your daughter on your lap, right?

Chung: That was. She was sitting next to me. As soon as the announcement came up, she just jumped right into my lap, and you see the laptop screen start to shake because she kicked it in the process.

Ryssdal: Why did you want her to be in this moment with you?

Chung: So two hours before we were going on, my daughter said, “Can I sit here next to you?” And I just listened to her. And I thought, “If this were happening, in other times, I would not be able to bring her with me, you know. I got to take advantage of this.” And she got so excited. She went and picked out her clothes. My wife helped her get dressed, and it was so special being able to share that with her.

Ryssdal: We were talking very briefly, you and I, before we turned on the microphones, and I suggested you’re probably really busy now. And that’s probably not a bad thing. I wonder, though, if the pressure that comes with this attention is, is worrying you as you think about the next project.

Chung: To be honest, I try not to worry so much about the work anymore. And part of the process of making this film was letting that sort of anxiety go, to let myself be anchored more in my family. So, yeah, the pressure in some ways, I feel it. But it’s been great to have these opportunities. I am very grateful for them.

Ryssdal: Yeah, you know, it’s so interesting that bit about not worrying about the work and being anchored in the family. Because this is this film you have made about an immigrant family. And you’re a guy who comes from an immigrant family. And there’s the stereotypical American attitude toward work, has got to work all the time. And family damage, sort of, you know, that’s kind of the, that’s kind of the side effect. And that’s just, it’s an interesting thing to hear you say.

Chung: Yeah, I think it is something that I’ve wrestled with all my life. I’m sure a lot of your listeners have also struggled with this. It’s just part of what it means to live here. And I feel it with this pandemic even more. You know, we’re really trying to balance home life and work life, and it’s kind of bleeding all together at the, at the moment.