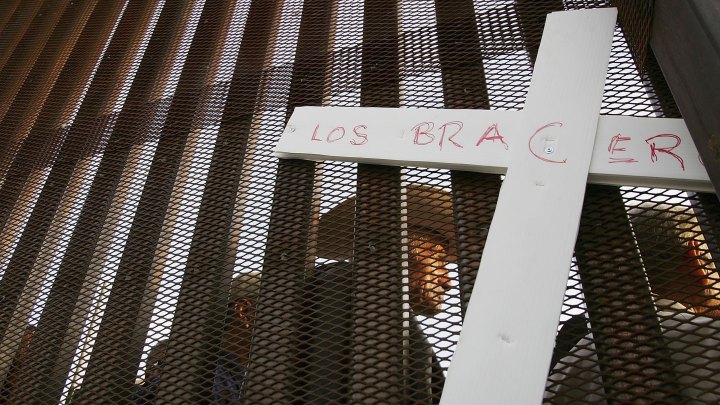 COPY
The original bracero program imported Mexican workers for the agriculture and railroad industries, but it was terminated in the 1960s amid reports of human rights abuses. Biden and Lopez Obrador may discuss a similar plan. David McNew/Getty Images

The original bracero program imported Mexican workers for the agriculture and railroad industries, but it was terminated in the 1960s amid reports of human rights abuses. Biden and Lopez Obrador may discuss a similar plan. David McNew/Getty Images
Listen Now

Mexican President Andres Manuel Lopez Obrador is set to meet with President Joe Biden on Monday. Immigration and border issues will be a major focus of their talk.

And as part of that discussion, Lopez Obrador has said he’ll propose a guest-worker plan for Mexicans similar to the “bracero” program that began during World War II.

Until it ended in the early 1960s, the bracero program brought millions of Mexicans into the U.S. on temporary visas to work — for cheap — in fields and on railroads.

The program was controversial. The workers were often subjected to brutal conditions, and the policy stirred conflict with unions and other domestic labor.

How would a reimagined bracero program work?

The program provided cheap labor while Americans were off fighting in the Vietnam War. It promised many Mexican workers better wages than they were making at home.

But it led to serious human rights abuses, according to Edward Kosack, professor of economics at Xavier University. “Dangerous jobs, people being hurt, not having adequate housing and food,” he said.

There are songs from both sides of the border about the bracero life, including Woody Guthrie’s 1948 “Deportee,” sung by Arlo Guthrie: “My brothers and sisters, they worked in the orchards / Rode the big trucks till they lay down and died.”

These days, there is a guest-worker visa called H-2A that the agriculture industry uses, which is widely seen as a bureaucratic nightmare.

A renewed guest-worker program could provide a safer alternative for some immigrants, said Daniel Sumner, an economist at the University of California, Davis. “The advantage of this for the U.S. is you regularize something, and you allow people to do something that they’re gonna try to do anyway,” Sumner said.

But the abuses of the bracero program could resurface, said Mireya Loza, a history professor at Georgetown University. She pointed out that the program ended in 1964 because Congress uncovered severe human rights violations. Loza herself comes from a family of braceros.

“And I think, ultimately, this kind of unchecked power of employers would make both employers and their lobbyists very excited,” she said.

The program, Loza said, is history to be learned from, but not repeated.