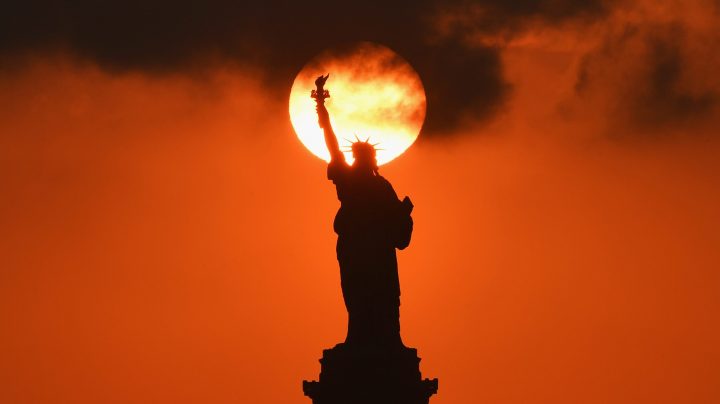 COPY
The sun sets behind the Statue of Liberty, an iconic symbol of welcome. Angela Weiss/Getty Images
Shelf Life

The sun sets behind the Statue of Liberty, an iconic symbol of welcome. Angela Weiss/Getty Images
Listen Now

President Donald Trump issued an executive order Monday restricting new visas for immigrant workers. The order is a new addition to the United States’ long history of immigration laws changing the country’s racial and economic makeup. Jia Lynn Yang, a deputy national editor at The New York Times, wrote about this history in her new book, “One Mighty and Irresistible Tide: The Epic Struggle Over American Immigration, 1924-1965.” The following is an excerpt from the book. You can also listen to Yang’s interview with Marketplace host Kai Ryssdal by clicking the audio player above.

At Liberty Island, [President Lyndon] Johnson had assured everyone that the bill he was signing “is not a revolutionary bill. It does not affect the lives of millions. It will not reshape the structure of our daily lives.” The president was hardly the type to downplay the importance of his own work. But in this case, neither Johnson nor his allies realized what they had set in motion. The law’s transformative impact would take years to reveal itself.

Initially, as reform advocates had intended, the number of immigrants from eastern and southern Europe increased and surpassed the number of arrivals from the rest of the continent. But though writers of the law were committed to ending racial immigration quotas in principle, they had not anticipated that many more immigrants would soon be arriving from Asia, the Middle East, and Central and South America — ​or that the law’s own mechanics would encourage their numbers. A Washington Post story on February 8, 1971, buried deep inside the newspaper, hinted at the changes slowly becoming evident under the headline, “1965 Law is Changing Pattern of Immigration in U.S.” Observing that more Chinese, Italians, Filipinos, Greeks, and Indians were now arriving, the article introduced readers to Dennis C. Syntilas, a Greek immigrant to New York who had arrived in 1956 under a special provision for refugees fleeing Communism. Since the passage of the 1965 law, and given its priority on reunifying families, Syntilas had sponsored no fewer than twenty-​four of his Greek relatives to enter the United States. “I advised them all to start out in pizzas,” he told the reporter. Syntilas was in effect describing chain migration, in which one immigrant’s arrival makes possible the entrance of an entire extended family through the system created by the 1965 law.

A man from Taiwan could enter the country for postgraduate studies in science and obtain a visa based on his specialized skills. Then he could bring his wife and children, who, under the 1965 law, would be given a preference over immigrants without family ties. If he were to become a citizen several years later, he could then sponsor his brother and sister, each of whom could bring their respective spouses and children. His wife could become a citizen as well and bring in her siblings and children. The couple’s parents could also be allowed to enter and would not count toward the overall cap on immigration. And so on.

By 1971, more Asians were entering the country than Europeans, often relying on exactly such a pattern of migration. The new immigrants established roots across the country. New York’s Chinatown, which had taken on a moribund air by the mid-​1960s, was revived by the rush of new arrivals. Two more Chinatowns spawned in the city, one in the Flushing area of Queens and another in Brooklyn’s Sunset Park neighborhood. Iranians, many arriving first as students and later claiming asylum after the overthrow of the shah in 1979, settled in California and Texas. Arab immigrants gravitated to the Detroit area and took jobs in the American auto industry. Many of the new immigrants entered the medical profession, as Johnson’s work to establish Medicare and Medicaid had stimulated tremendous new demand for health care services. Between 1965 and 1974, 75,000 foreign physicians entered the country, many of them Filipino, Iranian, Indian, and Korean. By 1989, the top ten countries sending immigrants to the United States were all in the third world. Meanwhile immigration from Europe, which was now enjoying a much stronger economy, typically accompanied by a robust social safety net, tapered.

It was not merely the types of immigrants entering the country that changed. The 1965 law also ushered in a return to mass immigration that had not been seen since the turn of the twentieth century. The number of immigrants living in the United States has more than quadrupled since the law’s passage, increasing from 9.6 million in 1970 to a record 44.4 million in 2017. Perhaps most striking, the foreign-​born population has now reached its highest share since 1910, returning the country to the very state that supporters of the national origins quotas wanted to unwind a century ago.

Given that the creators of the 1965 law were so careful to impose overall caps, how could this have happened? The answer is simple. Many of the new arrivals were immediate family members who did not count toward the worldwide limits. In addition, thousands of refugees from Cuba, Vietnam, and the Dominican Republic were admitted as nonquota immigrants, and they too brought their families. On the same day that Johnson signed the 1965 law, he declared an open door for Cuban refugees, leading to about 368,000 Cubans entering between December 1965 and 1972.

The creators of the 1924 law, who feared a mixing of European nationalities, would be aghast at the fact that the population of the United States now skews more nonwhite every year. In 2015 Pew Research estimated that without post-​1965 immigration, the country that year would have been 75 percent white, 14 percent black, 8 percent Hispanic, and less than 1 percent Asian. Instead, it was 62 percent white, 12 percent black, 18 percent Hispanic, and 6 percent Asian—​and was on its way to having whites constitute less than half the total population in the coming decades. We are only beginning to see the political ramifications of these demographic changes, especially in America’s suburbs. During the 2018 midterm elections, Democrats swept Orange County, onetime bastion of the GOP and home of Richard M. Nixon, now one-​fifth Asian and more than one-​third Latino. Similar changes have already shifted the state of Virginia to the political left and are potentially under way in Texas, Nevada, Arizona, and Georgia.

At the same time, because the 1965 law imposed the first-​ever numerical cap on Western Hemisphere immigration, it also laid the groundwork for our modern illegal immigration crisis. A year before the law, Johnson had ended a system for temporary Mexican labor known as the bracero program, which had been created during World War II to address worker shortages, particularly in farming. As evidence of abuse came to light—​with Mexican workers arriving at jobs to find much lower pay and harsher conditions than promised—​criticism of the program amplified. But ending the program, which had allowed an average of 200,000 braceros into the country each year, and then restricting immigration across the southern border, did not end the U.S. demand for cheap Mexican labor. On the contrary, in the more than forty years since the 1965 law, the number of deportations has exploded, yet migrants have continued to enter the country, where they are routinely exploited for their willingness to work for little money in an underground economy. Thus a law that was designed to create equality among immigrants unwittingly helped spawn a shockingly unequal system in which some immigrants are counted as desirable, while others are treated as criminals, in a country that depends on their labor but claims not to want them.

Excerpted from “One Mighty and Irresistible Tide: The Epic Struggle Over American Immigration, 1924-1965.” Copyright (c) 2020 by Jia Lynn Yang. Used with permission of the publisher, W. W. Norton & Company, Inc. All rights reserved.