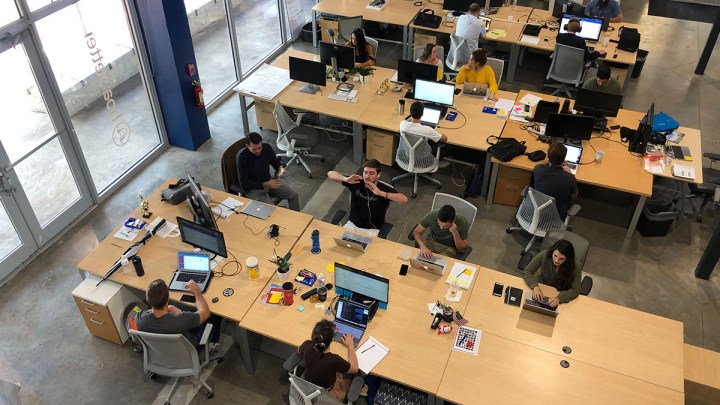 An overhead view of people working at computers in an open office. Gianrigo Marletta/AFP via Getty Images

An overhead view of people working at computers in an open office. Gianrigo Marletta/AFP via Getty Images

The Trump administration said Monday that it was extending a ban on green cards issued outside the United States until the end of the year and adding many temporary work visas to the freeze, including those used heavily by technology companies and multinational corporations.

The administration cast the effort as a way to free up jobs in an economy reeling from the coronavirus. A senior official who spoke to reporters on condition of anonymity estimated the restrictions will free up to 525,000 jobs for Americans.

The ban, while temporary, would amount to major restructuring of legal immigration if made permanent, a goal that had eluded the administration before the pandemic. Business groups had pressed hard to limit their reach, saying many of these workers are essential.

The ban on new visas applies to H-1B visas, which are used by major American technology companies, and their immediate families, H-2B visas for nonagricultural seasonal workers, J-1 visas for exchange students and L-1 visas for managers of multinational corporations.

There will be exemptions for food processing workers, which make up about 15% of H-2B visas, the official said. Health care workers assisting with the coronavirus fight will continue to be spared from the green-card freeze, though their exemption will be narrower.

The new steps to include non-immigrant visas satisfy many, but not all, the hardliners’ wishes.

The freezes on visas issued abroad are designed to take effect immediately. Other changes, including restrictions on work permits for asylum-seekers, will go through a formal rule-making process that takes months.

The administration is proposing a new way of awarding H-1B visas, which are capped at 85,000 a year and used by Indian technology giants as well as companies like Amazon Inc., Microsoft Corp. and Apple Inc., the official said. The administration wants to award them by highest salary instead of by lottery.