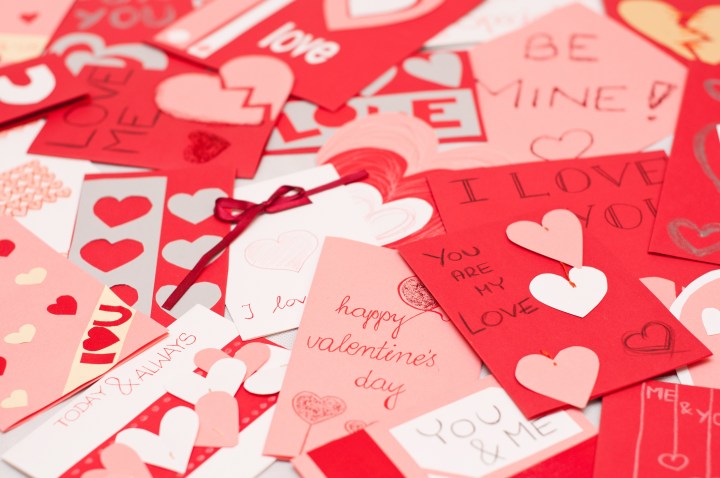 After nearly a month of having her store set up with Valentine’s Day merchandise, it was time for Edie Frère to take it down.

“Late birthdays work. Late Christmas works. Late Happy New Year works. But if you send a valentine after Valentine’s Day that says to my wife, ‘I love you,’ it’s not gonna work,” said Frère, owner of Landis Gifts & Stationery in Los Angeles.

Once a holiday ends, many stores either keep their seasonal cards and try to sell them again next year, continue selling them at a discount, give them to charity or send them back to the greeting card company. It can depend on the type of holiday — and the type of supplier — that retailers are dealing with.

Frère, who buys many of her cards from small, independent businesses, said she mostly puts out her seasonal cards again the next year, although her store has also donated them to charities and middle schools.

“I tend not to throw out cards, because somebody can always use one,” she said.

Some retailers say they sell their leftover Christmas cards at a discount after the holiday as part of their larger post-Christmas sale. Frère holds one with 40% off everything in her store.

Something about the romantic nature of Valentine’s constricts the purchasing window. Buying and gifting a Val’s Day card too late would be a grave error, as Frère observed. But it’s not really something one buys too early, either.

“Valentine’s is a last-minute holiday. You know, you go look for flowers, look for cards, you look for chocolates,” she said.

LeAnn Dolan, the owner of Ecru Modern Stationer in Portland, Oregon, said her store usually sells out of Valentine’s Day cards, and anything left over is saved for Valentine’s the next year.

“I typically have very little left over to be really concerned about,” she said.

That’s because, she pointed out, Valentine’s Day is a big holiday for cards (along with Mother’s Day).

“Once Valentine’s is over, I get very few people wanting valentines. It’s like, OK, that’s over,” she said, laughing. At other times of the year, “they’ll buy a love card if they really messed up.”

But like Frère, Dolan said she’ll sell her Christmas greeting cards at a discount during her store’s after-Christmas sale.

The stationery store Oblation Papers & Press — also based in Portland — continues to sell its seasonal cards three days after the actual holiday, according to Alicia Fox-Smith, the company’s manager and buyer.

However, many of the cards the company puts out for Valentine’s Day have general messages about love, without a specific phrase like “Happy Valentine’s Day.”

“So those we keep and can sell around the year,” she said.

For the ones that do have clear Valentine’s Day messages, along with other holiday cards, Fox-Smith said the company either saves them for next year or includes them in its “scrap packs.”

These packages are filled with letterpress remnants from Oblation’s print shop and can be used for collages, scrapbooking and gift embellishment.

Fox-Smith said they might also donate their papers, which sometimes include greeting cards, to the Children’s Healing Art Project — a charity that helps children and families who are dealing with medical challenges.

At the pharmacy chain Walgreens, all the greeting cards are from Hallmark, which sends its  merchandisers to pick up unused cards from the stores after each holiday, according to Megan Boyd, senior manager for marketing and merchandising communications at Walgreens.

“We work with our partners each season to determine if they want to sell the cards discounted for a period of time, but it is not a given that we do it for every season,” Boyd said in an emailed statement.

Frère of Landis Gifts & Stationery, who often buys from small suppliers, has also dealt with larger companies, including the American Greetings subsidiary Papyrus. Like Hallmark, Papyrus will pick up unsold cards.

If cards are reclaimed, Frère explained, you’re dealing with a “dating,” which is the time frame in which a retailer has to pay for the merchandise. With Valentine’s Day cards, a greeting card company might ship them in December, but you might not have to pay until, say, March 1.

“They will give you credit against future orders,” she said.

Frère said she sells the card for double the amount her business pays, although she also has to take into account costs for freight.

Hallmark and Papyrus did not respond to interview requests.

At Oblation Papers & Press, Fox-Smith said the company has its own product lines and will also order from other vendors, including small businesses like Lark Press and Ramona & Ruth.

“It’s just easier to deal with it on our own than to get in touch with the company and do the return.”

However, she said that arrangement might be beneficial if a retailer wants to experiment with a new line of cards, and has the safety of being able to return them if they don’t sell.

Overall, retailers say they’re seeing decent demand for greeting cards now, when a written message is one of the safest ways of communicating.

Although COVD-19 has upended many businesses, Frère said greeting card sales have remained fairly steady, although the pandemic drastically affected her business last spring, when the shop was temporarily closed. (Her business has both a brick-and-mortar location and an online store.)

Dolan from Ecru Modern Stationer said last Christmas was big for her store, and she believes the pandemic has encouraged more people to reach out to one another by mail. And Fox-Smith said she’s looking forward to a good year.

“People are wanting to connect more now than ever. Our business has survived, and we’re doing quite well,” she said. “I think it’s because people are coming in and they just want to write to the people they can’t see. They want that connection, and they have more time to write cards or write letters.”