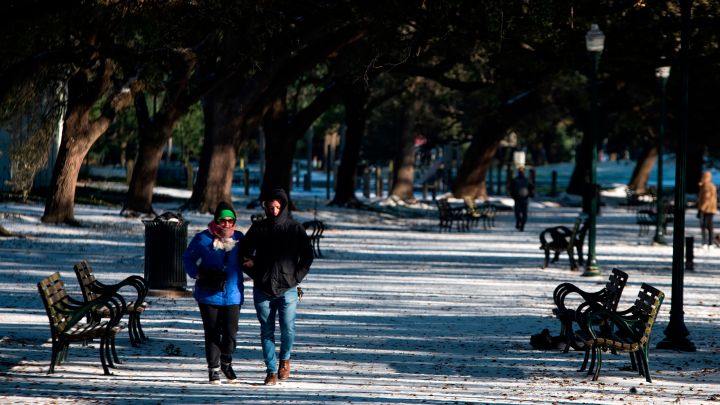 COPY
Texans are navigating loss of Wi-Fi, freezing homes and bursting pipes in the wake of the winter storm. Above, a couple walks through a snow-covered park in Houston. Mark Felix/AFP via Getty Images

Texans are navigating loss of Wi-Fi, freezing homes and bursting pipes in the wake of the winter storm. Above, a couple walks through a snow-covered park in Houston. Mark Felix/AFP via Getty Images
Listen Now

More than 3 million people in Texas don’t have any power right now.

In some parts of the state, people are dealing with rolling blackouts, but many have been in the dark for nearly two days now in temperatures well below freezing.

At Savitha Namuduri’s house, just north of Dallas, the power’s been coming and going since yesterday morning. That is making it hard for her to do her job at a marketing company.

“Losing power, that took the Wi-Fi away. The cellphones weren’t working, so it wasn’t even like I could use apps on my phone to stay in touch with my team,” she said.

But Namuduri said she feels lucky that her family at least has power some of the time, so their house is staying pretty warm.

For millions of people, that is not the case.

“It’s 45 degrees at our house right now. We still don’t have any power,” said Emily Hilton. Hilton lives in Houston with her husband and two kids. Their power has also been out since early Monday. It finally got cold enough that she decided to take a friend up on her offer to come over and get warm.

In Austin, Arlo Gilbert took his wife and kids to his mother-in-law’s, but then came back home to keep an eye on things.

“Myself, and I’ve talked to all my neighbors, we’re all really, really worried about pipes bursting,” he said

But when he and his dog woke up this morning, “we could see our breath indoors. And it became clear that there was no way I could ride that out any further,” Gilbert said.

So he left his faucets dripping and drove up to his mother-in-law’s.