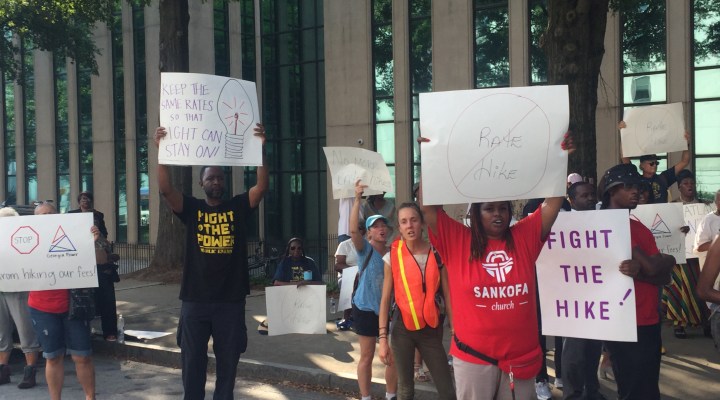 Georgia Power, the state’s largest electric utility, wants to raise rates for 2020 by about $10 for a typical residence, a total of about $2.2 billion over three years.

Some of the company’s customers are unhappy with the request, particularly because Georgia Power’s parent company, Southern Company, generated more that $2 billion in profit last year.

The utility started making its case for the hike before utility regulators, the Georgia Public Service Commission, in early October.

Across the street from those hearings, a few dozen people gathered to protest. They held signs urging cars to honk and join them, and chanted, “Fight the hike,” and “Not today, not a dime!”

The Rev. Aaron Robinson is pastor at Mount Welcome Missionary Baptist Church outside of Atlanta. He showed up to protest with some of his parishioners.

“Most of my congregants are people that are on fixed income. And they’re retired, they’re just trying to make it, trying to live.”

Inside the state office building, regulators heard arguments on the proposed rate change, including hours of testimony from Georgia Power’s CEO Paul Bowers. He said the company needs more money to cover recovery costs from past severe storms, upgrade and expand its grid, clean up coal ash ponds and comply with other environmental regulations.

“While we have proactively taken steps to manage costs and improve efficiencies, it has been six years since our last rate case,” Bowers said. “And our current rates are no longer sufficient to cover the costs of the business.”

But Bowers acknowledged the explanation might not satisfy some customers. So the company plans to expand low-income assistance programs, too, he said.

“We recognize that 40% of our customers make less than $40,000, so the programs that we have proposed are really focused on that,” he said.

But Robinson wondered why Georgia Power needs higher rates when its parent generated more than $2 billion in profits last year.

“If it was in a hole, if it needed the money, that would be one thing,” Robinson said. “But it’s not in a place where it absolutely needs the money. Anytime you can pay your CEO millions of dollars, then you really don’t need the money.”

The Georgia Public Service Commission is expected to make a decision about the rate hike request in December.