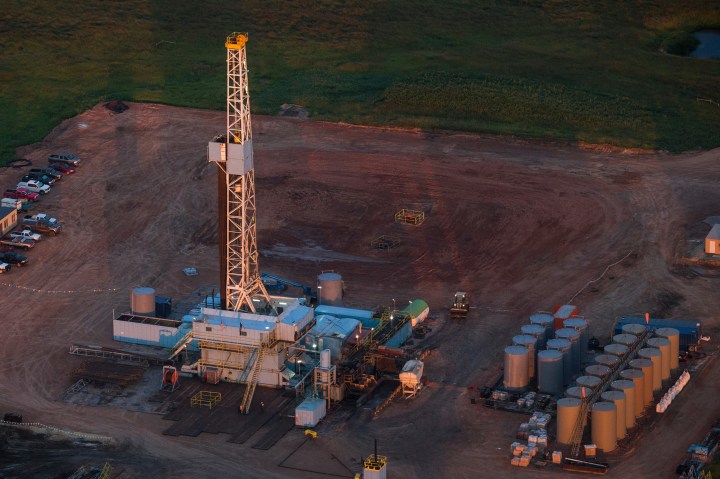 In a new memoir called “The Good Hand: A Memoir of Work, Brotherhood, and Transformation in an American Boomtown,” folksinger and playwright Michael Patrick F. Smith writes of his time working on an oil field in the fracking boomtown Williston, North Dakota. Click the audio player above to hear Smith’s conversation with “Marketplace” host Kai Ryssdal. The following is an excerpt from the book.

I would come to think of Champ’s place as a microcosm of the boom. The flophouse was a revolving door for people who came into town looking for a new start, a new job, and a better life. We had little in common, and yet we were living under one roof in one town at one specific moment in time because of vast historical and technological forces well beyond our purview; but, if you asked any of us why we were there, the answer would have been uniformly the same: we were there to make money.

“Ours is a speculating race,” mused a writer from the New York Journal of Commerce in 1865, speaking of the population of Pithole, “prone to the cultivation of that art which gets sunbeams from cucumbers . . .”

Colonel Edwin Drake, the godfather of oil exploration, earth’s first boomer, the first man to ever raise a derrick, was a dreamer. Considered a lunatic by locals, he was heckled while attempting to drill the world’s first oil well. Drake kept at it. When he ran out of money, the company that had hired him offered nothing more than a train ticket home.

“You all feel different than I do,” he wrote them. “You all have your legitimate business which has not been interrupted by the operation, which I staked everything I had upon . . . I got skin in the game,” said Drake, “and I got a dream.” He went on to irrevocably alter the course of human history.

And what of us? Piled onto mattresses in a flophouse in Williston, North Dakota? What sunbeams do we hope to extract from cucumbers?

Skip wants to get a job at a gas station so he can buy a reliable car. Tammy wants a shift at McDonald’s. Frank plans to stick it out at the Pepsi warehouse so they will fund his training for a commercial driver’s license, so he can make a middle- class living driving trucks. Champ hopes to pay off his house so he can sell it before the boom goes bust and buy another house somewhere nicer. For me, at this point— before I learn what it means to be a good hand, before I understand how important that concept is to me, how much magic those words conjure in and unto themselves— I just want to make some money so I can start over. In retrospect, it feels ridiculous, but I figured I’d work for three months, make $20,000, and get the fuck outta town.

My thoughts on what I’d do with that money are almost too embarrassing to record. They were the pie- in- the- sky ideas of a complete idiot. Embarrassment crawls up my neck just thinking about it. I was going to use the money I earned to fund development of a movie I was writing (I would never finish the first draft of the script, by the way), or . . . I was going to move to Thailand to study a meditation technique called qigong. Truthfully, I hadn’t thought ahead. I just thought, no, I knew, that money would solve my problems.

Money was always tight growing up. My father had trouble keeping up with the taxes on our house, and we lived under constant threat of foreclosure. The farmhouse had few amenities. When I was very young, I slept on a bed that was made from an old door covered with a piece of foam. We never went hungry, but sometimes dinner was plain spaghetti sauce over noodles— for weeks on end.

My relationship to money remains infantile. Money scares the hell out of me. I don’t know what to do with this stuff. Save it? How? Spend it? Sure! In Williston, I thought about money in the same stunted way as the dudes who got their first oil field paycheck and immediately bought new Ford F- 150s. Money! It’s great!

For Champ, Frank, Skip, Tammy, and me, our desires are so modest they could fit in a tin can. We aren’t reaching for the brass ring; we’re hustling just to get in the game. The only way to justify our experience is by saying we want money. Because worship of money is at the root of three magic words: The American Dream. I will hear those words spoken time after time in Williston. They are used to justify endurance of the harshest conditions. Climbing an oil rig in subzero temperatures without a properly fitted safety harness, I’ll hear an oil field hand shout it: “This is the American Dream, motherfucker!” Falling down drunk in a whiskey- stained hotel bar, a nineteen- year- old on his way to bang it out with a bored hooker will slur it at me, “It’s the American Dream, man.” And in a parking lot, sleeping in a broken- down car, with gray at his temples and lines crowing from his eyes, an out- of- work construction worker will say it softly, a longing incantation: “This is the American Dream.”

Those three words stun me, confound me, anger me, make me laugh in irony and in joy, and, I admit it, they give me hope, too. Like all the other suckers. At Champ’s, sleeping on the flophouse floor, the words resonate with me more than anywhere I have ever heard them, before or since. But what they really mean is: Money. And I don’t know a damn thing about money. I just know I haven’t had enough of it.