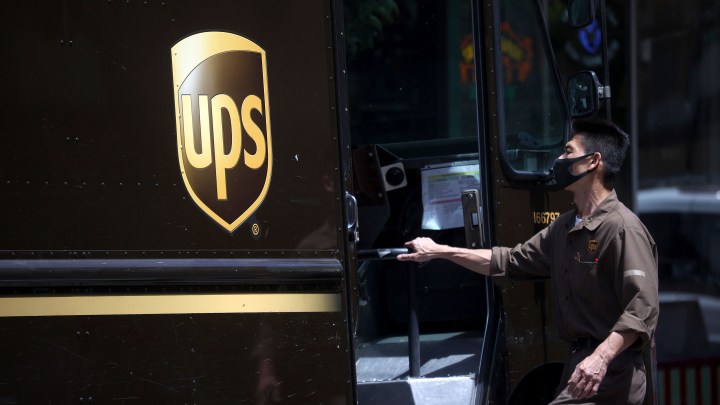 COPY
A UPS driver gets into his truck while on his delivery route on July 30, 2020 in San Francisco, Calif. Justin Sullivan/Getty Images
COVID-19

A UPS driver gets into his truck while on his delivery route on July 30, 2020 in San Francisco, Calif. Justin Sullivan/Getty Images
Listen Now

UPS reports its fourth quarter results Tuesday. The shipping industry has benefited from the explosion of e-commerce during the pandemic: In the third quarter, UPS profits were up over 11% compared to the same time the year before.

But their costs have increased, too. Shipping companies have expanded capacity to handle the surge in deliveries during the pandemic.

“All of those costs are hitting the bottom line of a lot of these carriers,” Rogers said.

He said shippers are also servicing sectors of the economy that aren’t doing so well. For instance, Rogers said there’s a shortage of semiconductor chips right now, which means that there are less of them to ship to computer and auto manufacturers.

“So all that kind of stuff directly affects logistics companies like UPS,” he said.

Last week, UPS announced it’ll sell off its freight business, which focuses on trucking cargo around the country.

Adie Tomer at the Brookings Institution said that’s a bet on the profitability of home deliveries.

UPS said the sale will help the company be “better not bigger.”