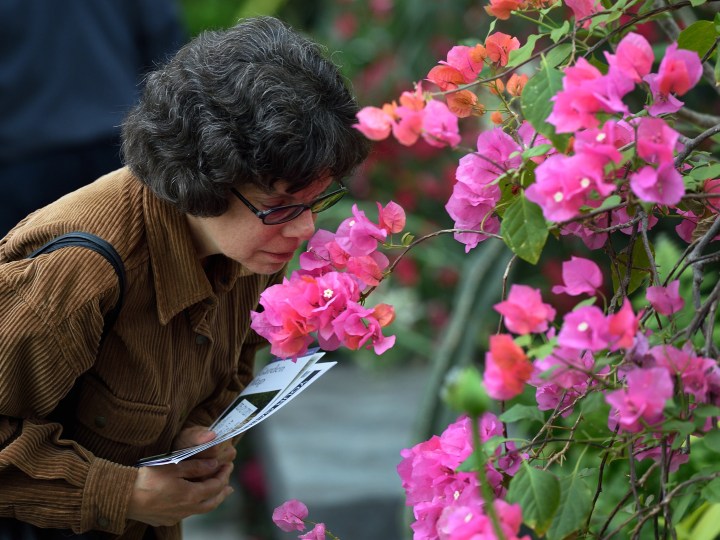 This may just be one of the oddest research projects to emerge during the pandemic.

A team of scientists in Europe is compiling an archive of historic smells from across the Continent, some dating back 400 years. The $3 million  project, called Odeuropa, could add a new olfactory dimension to museums  and heritage sites — allowing visitors to explore the past with their noses.  The project is designed to underline the importance of smell in political and economic history and correct a deficiency in our perceptions of the past.

“When it comes to history, smell is the neglected sense,” said Cecilia Bembibre of the Institute for Sustainable Heritage at University College London. “We rarely get to know how smells had a role in daily lives, domestic lives, in the economies, in the politics of earlier times. And yet there are many, many stories to be told via smells that haven’t been told before,” she said.

Bembibre and other scientists and historians from around Europe have joined the Odeuropa project to “dig out references to past smells and try to bring them to our noses today.”

Like the smell of money from the early days of capitalism.

Will Tullett, a smell historian from Anglia Ruskin University in Cambridge, England, and another member of the Odeuropa team, said the project will, for example, archive the odors that wafted through what is widely believed to be the world’s first stock market, the Amsterdam Stock Exchange, which opened in the early 17th century.

“This had a very distinct smell as a space,” Tullett said. “The smell included that of the river water from the Amstel that flowed underneath the stock exchange, the sweat and the musk from the traders that crowded on the floor, but also the smells of things like nutmegs and cloves.”

The traders would have brought those aromas into the market as they were shuttling between the exchange and the warehouses that stored the new spices pouring in from Europe’s colonies. The traders and merchants of the day, said Tullett, had to have a nose for business.

“They’re having to distinguish new products that they’re less familiar with and maybe try to understand what a good version of that product, that is fresh and genuine, smells and looks like,” he said.

Tullett argued that smell has often played a highly influential role in changing the course of events. Take London’s Great Stink in the summer of 1858. Hot weather magnified the stench from the River Thames, which had been used as an open sewer for centuries. The smell so powerfully assailed the nostrils of the lawmakers in the houses of Parliament on the north bank  of the river that they were finally galvanized into approving the construction of a modern, comprehensive sewage system.

Odeuropa will use advanced technology to compile the archive.

That includes gas chromatography to sniff old artifacts like snuffboxes and cosmetics bottles to identify the odoriferous compounds they once contained. Artificial intelligence will be used to scan literature and even paintings from the distant past.

“The computer will recognize from the text or from the painting that there is a smell depicted or described,” explained Marieke van Erp, a computer expert with the KNAW Humanities Cluster in the Netherlands. “Then the computer will put that in a database, and that database will have a connection to a chemical database,” she said.

It is hoped that the chemical database will turn up formulas enabling chemists to reproduce the odors for use in museums and other places that strive to evoke the past.

Anticipating the Odeuropa project, the Rijksmuseum in Amsterdam has already done this, unleashing in the vicinity of a painting of the Battle of Waterloo a curious bouquet: the smell of horses combined with the smells of gunpowder, sweat and Napoleon.

The emperor, it seems, saturated himself daily in a particularly pungent  eau de Cologne.

“Napoleon really, really liked this particular perfume, so they decided to put a whiff of that in the smell,” van Erp said.

“When you do this and you do it right, it can be such an enrichment of the museum experience for regular visitors, but also for visually impaired people who maybe would not normally go to a museum,” she said.

Perfume makers have expressed an interest in Odeuropa, along with the so-called scent marketers, who sell appealing aromas to hotels and retailers. Bembibre of University College London said the Odeuropa project is highly topical. The coronavirus pandemic has underlined the importance of smell, and not just because the loss of that sense — anosmia — is among the symptoms of COVID-19, but because so many people are now working from home.

“Our olfactory environments have been reduced in many cases to our domestic environment,” Bembibre said. “So we can find ourselves strangely missing the smell of the office, for example.”

That may be due to a more relaxed approach to personal hygiene while working from home. One of the many commercial consequences of the pandemic has been that deodorant sales have plummeted, leaving another whiff of history.