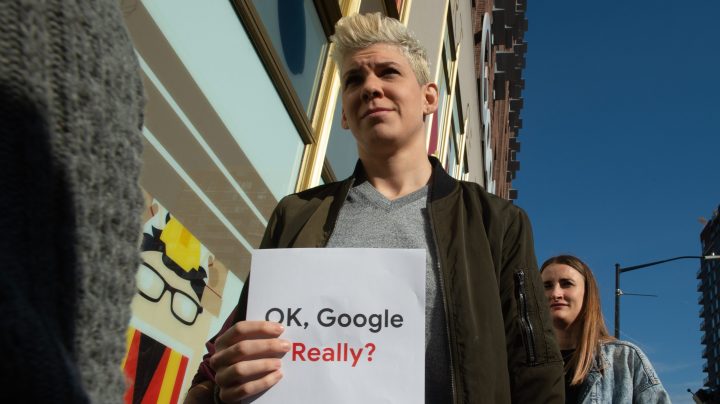 COPY
Google employees stage a walkout over sexual harassment in New York in 2018. Some employees of the giant internet company have created a union to support worker activism. Bryan R. Smith/AFP via Getty Images

Google employees stage a walkout over sexual harassment in New York in 2018. Some employees of the giant internet company have created a union to support worker activism. Bryan R. Smith/AFP via Getty Images
Listen Now

Two hundred and twenty-five engineers and other employees at Google have formed a union.

That’s a small fraction of Google’s workers, but the move is raising some eyebrows across the Valley, which is not exactly a union-friendly place.

It’s also unsurprising: Activism has been taking over Silicon Valley for the last couple of years, and Google employees have been among the most vocal. In 2018, more than 20,000 people walked out in protest of the company’s handling of sexual harassment. Many also protested the use of Google technology in military drones and immigration enforcement.

But, professor Tom Juravich of the University of Massachusetts Amherst said, up until now unionizing has been rare. “Silicon Valley’s attitudes towards unions have been downright hostile. This really is the first group of workers at a major employer in Silicon Valley.”

This union’s main aim is to support employee activism, rather than negotiate a contract.

Union organizers did not respond to Marketplace’s request for comment. Google responded: “Our employees have protected labor rights that we support. But as we’ve always done, we’ll continue engaging directly with all our employees.”

The ramifications of this go beyond Google, said professor Veena Dubal at the University of California, Hastings. “It will inspire workers at other tech firms to see that this is a possibility.”

But many experts point out this is a David-and-Goliath fight. “It seems like an extraordinarily uphill battle,” said professor Louis Hyman from Cornell. He pointed out that only 225 of Google’s employees have joined so far, out of more than 260,000. “This union will have to rely on moral suasion. It won’t be the same as a normal kind of union that has that power to be the official union of Google.”

But he also said this union, as small as it is, signals major changes for Silicon Valley.