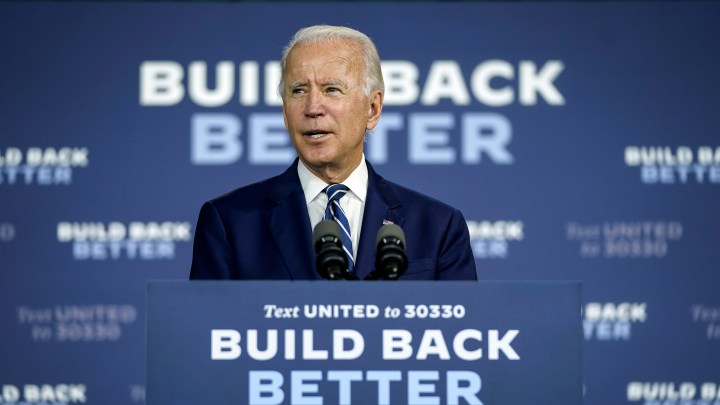 We’ve heard all the promises from politicians — plans for new legislation or government programs that will create thousands or even millions of new jobs.

The appeal is obvious. We love jobs because, well, they’re jobs. And politicians love promising jobs because it shows that they care about working people.

“Being able to promise new jobs is the most tangible benefit really a politician can offer,” said Sara Hinkley, a labor economist at the University of California, Berkeley. Jobs are also often what communities get in exchange for offering companies tax breaks and subsidies. “So a lot of times the jobs promises are made in order to justify spending public money.”

But where do these jobs numbers come from?

It starts with a huge web of government data that goes back years.

Economists take that data and combine it with research on how companies and people spend money. Then, they plug that information into models.

“It’s a very hard thing to do,” Haltiwanger said. “So the challenge is to be able to isolate the particular policy and its impact.”

Let’s say a city wants to attract a new hospital by offering years of tax breaks and subsidized loans, and in return, the town gets jobs. Economists will run the numbers in three circles, said Betony Jones, who does this work as the founder of Inclusive Economics.

Level one is direct impacts, like construction workers and hospital staff. Next comes supply chain jobs — say, selling medical equipment, surgical supplies and pharmaceuticals. Finally, economists measure the impact of the workers’ paychecks in the community, which has an effect on housing, restaurants and retail.

Forecasting for traditional projects like this can be pretty precise. But for new industries, the math get can fuzzy, Jones said. Take President-elect Joe Biden’s plan to create 1 million new jobs in the auto industry by moving the country to electric cars.

Producing batteries for electric cars relies on evolving technology, so there’s not as much jobs data. And eliminating cars that run on gas will lead to job losses. So to make a net gain, Biden needs to create incentives for Americans to buy electric cars and for domestic carmakers to use batteries made by companies in the United States instead of China.

“So you have to sort of marry the policy objective and policy design to the economic modeling in order to sort of understand not just how many jobs are created, but what sort of policy interventions are going to be necessary to create those jobs,” Jones said.

And it’s not just about quantity — it’s about quality.

“Are they going to pay enough to support a family? Are they going to be jobs that give workers more voice and power in the workplace?” Jones said. “Because those are the things that really matter to people’s lives.”

But the answers to those questions could be years off — after the factory is built, workers are hired and electric cars are coming off the assembly line.

“One of the shortcoming around the whole conversation around job creation is that we don’t often go back and look to see how accurate the models actually were,” said Hinkley of UC Berkeley. “You know, you bring in the company and then everyone sorta forgets about the promises that were made.”

Well, not everyone. Just ask the taxpayers of Wisconsin, who famously agreed to hand over billions of dollars and thousands of acres of farmland to Taiwanese company Foxconn. It was supposed to build a state-of-the-art liquid-crystal displays factory, create 13,000 jobs and sink millions into the local economy.

Three years later, almost no progress has been made, and Wisconsin is fighting to rework the deal.