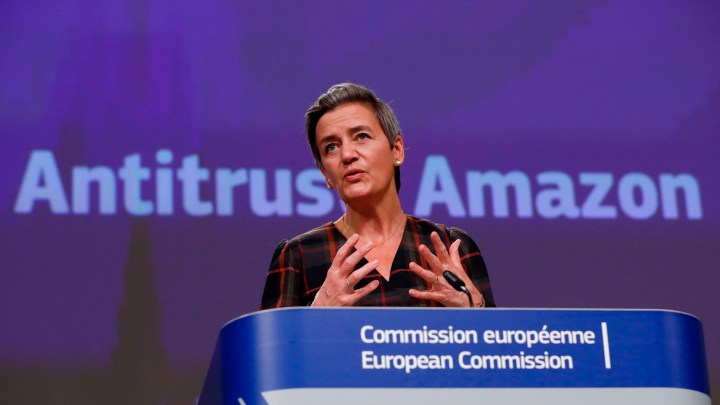 European Union regulators have filed antitrust charges against Amazon, accusing the e-commerce giant of using data to gain an unfair advantage over merchants using its platform.

The EU’s executive commission, the bloc’s top antitrust enforcer, said Tuesday that the charges have been sent to the company.

The commission said it takes issue with Amazon’s systematic use of non-public business data to avoid “the normal risks of competition and to leverage its dominance” for e-commerce services in France and Germany, the company’s two biggest markets in the EU.

The EU started looking into Amazon in 2018 and has been focusing on its dual role as a marketplace and retailer.

In addition to selling its own products, the U.S. company allows third-party retailers to sell their own goods through its site. Last year, more than half of the items sold on Amazon worldwide were from these outside merchants.

Executive Vice President Margrethe Vestager, the EU commissioner in charge of competition, said it’s not a problem that Amazon is a successful business but “our concern is very specific business conduct which appears to distort genuine competition.”

Amazon faces a possible fine of up to 10% of its annual worldwide revenue, which could amount to billions of dollars. The company rejected the accusations.

“We disagree with the preliminary assertions of the European Commission and will continue to make every effort to ensure it has an accurate understanding of the facts,” the company said in a statement.

The company can, under EU rules, reply to the charges in writing and present its case in an oral hearing.

Vestager also opened a second investigation into Amazon over whether it favours its own products and those from third-party merchants that use its logistics and delivery services.

It’s the EU’s latest effort to curb the power of big technology companies, following a series of multibillion dollar antitrust fines against Google in previous years.