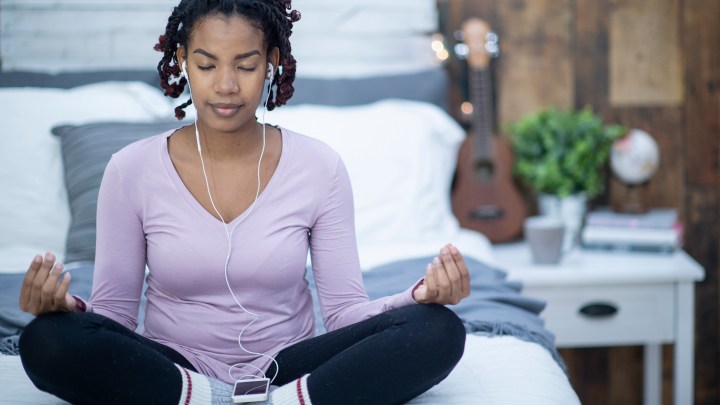 COPY
Trying to keep calm during these stressful times? You're not alone. FatCamera via Getty Images
COVID-19

Trying to keep calm during these stressful times? You're not alone. FatCamera via Getty Images
Listen Now

Feeling a little anxious these days? Perhaps anxious about much of the uncertainty we’ve been talking about for the last several months?

Well, people are finding their own ways of dealing with the stress. One is mental health and meditations apps, an industry that’s projected to be worth $2 billion by 2022.

“Between the elections happening right now, race wars and police brutality, it’s so chaotic,” she said.

Harley, 24, lives in Atlanta. A couple weeks ago, she downloaded the meditation app Calm. “It’s like a sigh of relief,” Harley said, sighing. “You know what I mean? It brings a point of peace.”

One of her favorite features is the celebrity-led meditations. Scottie Pippen talks you through his basketball journey. Lucy Liu reads you a story. And Matthew McConaughey puts you to sleep.

A Calm subscription costs $69.99 a year, and the app’s been downloaded 80 million times. It jumped to the top of Apple’s Health and Fitness category right after Election Day. Other apps like Headspace, Reflectly and Sleepiest aren’t far behind.

“If there’s one thing these simple practices can do, they can train attention,” said Richard Davidson, founder of the Center for Healthy Minds at the University of Wisconsin-Madison.

He said they can also help with loneliness, depression and anxiety — all made worse by the pandemic.

Anindya Ghose, professor of information, operations and management sciences at NYU Stern, said poor access to health care and higher smartphone penetration has made health the fastest-growing app category. And it’s trending away from fitness and nutrition and toward mindfulness. Plus, these interactive apps are getting better.

“The features that were available in mobile apps five years back are a lot more rudimentary compared to what we have now,” he said.

Because when you boil it down, these companies aren’t just app makers. They’re content creators.