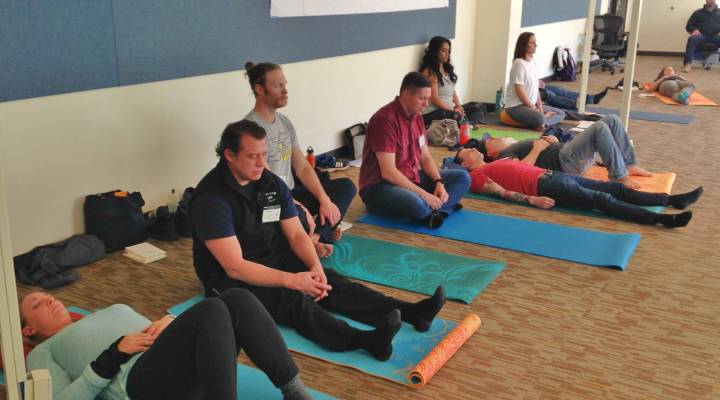 In front of him, around 25 first responders — most of them police officers — follow his lead. This is Goerling’s introductory workshop to mindfulness meditation.

“I think in many ways, mindfulness is a foundation for the evolution of policing in America,” Goerling said. “It’s a foundation for us as an institution to take a really fair and deep introspective look at systems that frankly the data shows are oppressive to certain populations, in many cases to people of color.”

Police use of force has come under scrutiny in recent years — especially in communities of color.

It’s raised concerns around aggression and how officers can control it. That’s why Goerling, who serves on the Hillsboro Police Department, is turning to mindfulness as a possible solution.

Goerling has been teaching his mindfulness workshops since 2012. He thinks the meditation practice can help improve the mental well-being of cops, which can then help them respond more compassionately to those they serve.

“The thing I think is interesting is that mindfulness does whatever we need it to do, or at least that’s the way it’s talked about,” said Nicholas Van Dam, assistant professor at the School of Psychological Sciences at the University of Melbourne who has conducted research on mindfulness and meditation.

“We don’t have a good definition, or a reliable definition of what mindfulness is,” continued Van Dam. “It basically ends up being this panacea and people apply it to whatever they want to apply it to.”

Back in the workshop, the officers gather in groups on their yoga matts to debrief after their first guided meditation with Goerling.

“Times are changing, so I think there’s a lot more focus on training that’s thoughtful and really getting police officers to be more intuitive about what’s going on with them, the effects of stress,” said Portland Police Bureau Sgt. Lacey Sparling.

“I think in many ways mindfulness is a foundation for the evolution of policing in America,“ Goerling says.

Goerling brings workshops like this to police officers across the country. The price varies per person, from $150 for a one-day workshop to $700 for a three-day retreat. The Menlo Park Police Department in Northern California recently invested in training its entire force in mindfulness for a grand total of $170,000.

“It’s something that’s very different from shooting and Fourth Amendment training and all of the things that we do,” said Lee Dobrowolski, chief of the Hillsboro Police.

His department has already introduced rounds of mindfulness training to its officers for under $6,000. That’s just a sliver of the almost $3 million Hillsboro spends on medical and mental health care per year. The department is also working on a pilot program to introduce yoga training.

And there’s evidence of this. Matthew Hunsinger, an associate professor at the School of Graduate Psychology at Pacific University in Oregon, helped conduct an eight-week study on the effects of mindfulness on police officers.

He said the results showed “improvements in stress, we saw decreases in burn out. We also saw that they reported engaging in less aggression.”

Even so, psychology professor Van Dam says studies like this one might be overreaching in its results.

But for Andrew Roberts, a sergeant of criminal investigation in Salem, it’s worth a shot.