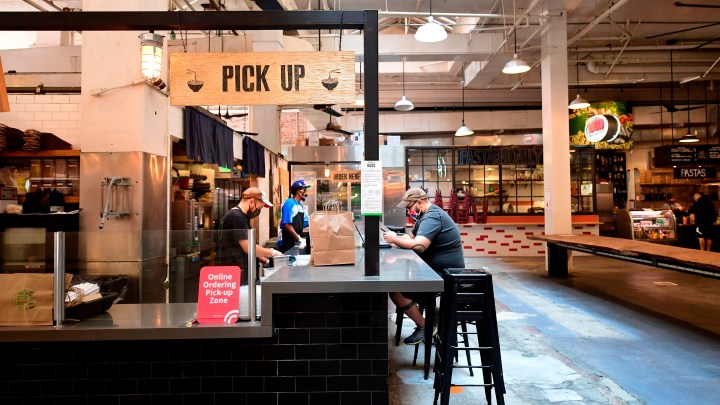 Left Coast Seafood, a restaurant in Venice, Florida, had a decent summer, considering the pandemic. The restaurant reopened for sit-down service in May.

“The customers were a little bit apprehensive in the beginning, but as people became more comfortable, business picked up,” co-owner Mariel Arbuckle Terone said.

Then, at the end of September, Florida lifted all restrictions on restaurants. They could open at 100% capacity.

“And as soon as that announcement was made, our phone started ringing off the hook,” Terone said.

Customers wanted to know: What was the restaurant going to do?

“People told us, ‘We’re not going to places that are going to be open at 100% that aren’t still social distancing,'” she said.

Left Coast decided for everyone’s safety to stay at half capacity, keep its tables spaced out and continue to require masks for staff.

Those phone calls the restaurant got are yet another sign that the virus is driving the economy. States or local governments can lift lockdowns, but a lot of people will still be afraid to go to bars, restaurants and movie theaters because they don’t want to get sick.

And Cook said that as long as COVID-19 is spreading unchecked, we will see a familiar economic pattern — the stop and start.

Getting the virus under control, at least until there’s an effective, widely available vaccine, does not necessarily require strict, widespread lockdowns. The ideal approach for the economy would be more of a middle ground, said Seth Carpenter, chief U.S. economist for UBS.

“So, testing, tracing, very narrowly targeted restrictions, mask mandates — those sorts of things allow most, albeit not all, the economic activity to continue while also still trying to restrict the spread of the virus,” Carpenter said.

Besides the virus, the other thing that’ll determine how much consumers spend going forward is fiscal stimulus. But we don’t know yet whether this Congress or the next will pass another stimulus bill — or what it would look like. Our country and our government are deeply divided, and that makes compromise hard.