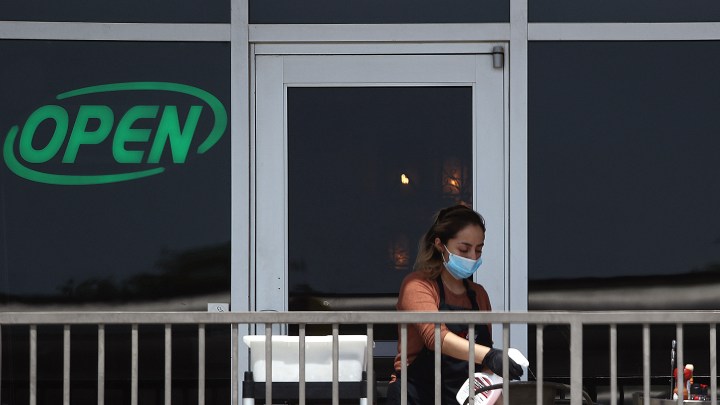 COPY
Restaurants and bars in states where COVID-19 is spiking have run up against new rules to once again cut capacity or certain services. Ronald Martinez/Getty Images
COVID-19

Restaurants and bars in states where COVID-19 is spiking have run up against new rules to once again cut capacity or certain services. Ronald Martinez/Getty Images
Listen Now

The latest jobs report shows that 4.8 million Americans went back to work in June. More than 30% of those job gains were from bars and restaurants.

With cities now shutting businesses back down because of spikes in COVID-19, what will the shutdowns mean for those industries?

At the end of June, because of the steep rise in COVID-19 cases in Texas, Gov. Greg Abbott, a Republican, put out an executive order. Restaurants, which had been reopening, had to drop to half capacity. Bars had to close.

“Logistically, it’s a nightmare,” said Tee Allen Parker, co-owner of Machine Shed Bar & Grill in Kilgore, Texas, near Dallas, that had to suddenly shut down again.

The Machine Shed had a charity event planned for the next day.

The restaurant froze some of the food and donated the rest, losing thousands of dollars.

Parker is the lead plaintiff on a lawsuit that bar owners have filed against the state. She says she takes COVID-19 seriously — that she had the virus in February and it was awful, and her daughter is an ICU nurse. But she believes the bar shutdown order is arbitrary since so many other businesses in the state are open.

In Venice, Florida, Mariel Arbuckle Terone has been thinking about what’ll happen to her restaurant, Left Coast Seafood, if it’s ordered to shut down again.

“It’s something that is always looming, kind of,” she said.

After the initial lockdowns in March, the restaurant got a Paycheck Protection Program loan from the federal government and was able to bring back 80% of its staff.

But that money is almost gone, and closing down again for takeout-only would mean laying off most of its workers.

“Really, we only need one or two people in the kitchen. Maybe three people up front to answer the phone and run the food out to the curb,” Terone said.

Meanwhile, Terone is worried about the coronavirus itself. She has a 1-year-old at home. Her father, who co-owns the restaurant, is 65.

“So it’s scary for him being in here,” she said.

Terone says another restaurant in town switched to takeout-only because of the spike in COVID-19 cases. She’s wondering if that’s the right choice for Left Coast, too.