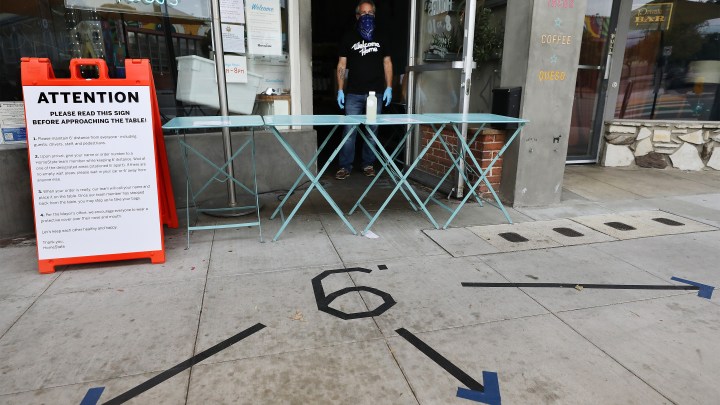 As virus cases surge in Arizona, Florida, California, Texas and other states, the conversation has begun about whether it makes sense to at least partially close businesses like restaurants again.

If you run a restaurant, you’d have way more food than you’d need to fulfill takeout orders, to start.

“What do you do with [food] long-term? You could try to sell it off to supermarkets,” said Mike Haller, a manager at UL Everclean, which advises restaurants on food safety.

Or you could sell the food directly to consumers — turning your restaurant into a little grocery store. You could also freeze the food and hope it stays good for a while.

Also, you’d have to call your suppliers and tell them actually you won’t be needing those 10 cartons of tomatoes, and you don’t know how many you need.

“Most of these food facilities, they go off of same-store sales so they can look back in history and find out like, well, we need so many pounds of shrimp this week. And with these disruptions, that makes it an absolute nightmare for knowing what to order because these are unprecedented times,” Haller said.

Shutting down again would also hurt sales. And a restaurant is not going to make up the difference with takeout.

All of this puts small restaurants in particular at risk.

Vlad Rikhter is CEO of the tech platform Zenput. It advises big restaurant chains like Domino’s and Sweetgreen. He said if you own one location and it’s in a place under mandated lockdown, that could wipe you out. “Especially if you just ordered $10,000 worth of inventory, and you had to toss $5,000 of it out because you can’t hold it for three, four, five weeks, or whatever the time period is.”

Rikhter said the big chains would be in a better position to get through another round of lockdowns because they have lots of cash and lots of locations.