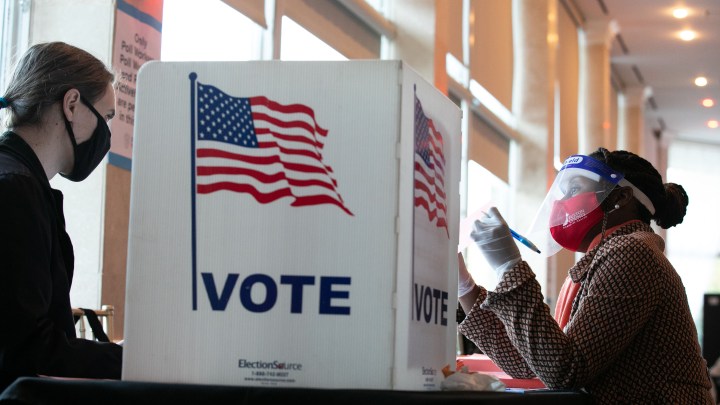 COPY
Election results could determine how much legislation is passed between now and the end of the year. Jessica McGowan/Getty Images
Elections 2020

Election results could determine how much legislation is passed between now and the end of the year. Jessica McGowan/Getty Images
Listen Now

With control of the White House and Senate up for grabs in Tuesday’s election, economic policy in 2021 could look very different. But analysts across the political spectrum predict the outcome of the election will also play a key role in what, if any, legislation makes it through the legislative process in the current term, before the end of this year.

To state the painfully obvious, economic policy for the next two months comes down to politics.

“I think the agenda of what needs to be done will stay the same. I think the urgency of whether or not anything will get done will be incumbent upon the outcome of the election,” said Mike DuHaime, a long-time Republican strategist and partner at the consulting firm Mercury.

Especially when it comes to more pandemic relief. If, for example, Democrats win the White House and Senate, DuHaime thinks they’d probably wait until after inauguration to pass a bill with more of what they want in it.

On the other hand, said GOP consultant Chris Jankowski, “if President Trump is reelected, and the Republicans clearly are maintaining control of the Senate, then I believe President Trump will want to do something at that point.”

Jankowski said that could happen. But what’s more likely is that — similar to other post-election windows — very little gets done on Capitol Hill.

“And I think the virus will dictate most of what happens both in Washington and in the economy,” Jankowski said.

And the virus doesn’t care about politics or the deadline that’s coming up on Dec. 11, when government funding runs out. But that deadline might create an opportunity to get some kind of pandemic relief through Congress.

“So lawmakers will have to come together and pass something, and it’s my hope that it will address all of the suffering that’s happening now,” said Amanda Fischer, policy director at the Washington Center for Equitable Growth.

That would be a continuing resolution, which keeps government funding broadly at preexisting levels, with whatever add-ons can get enough votes to pass. Former Democratic strategist Robert Shrum, who now directs the Center for Political Future at the University of Southern California, said that’s probably the best bet for pandemic relief before the new year.

“I think you will get a CR,” Shrum said. “Because if Republicans lose the presidency and lose the Senate, the last thing they want to do in the lame-duck session is be responsible for shutting down the government.”

But, again, all of these are ifs, which are really tough to plan around.