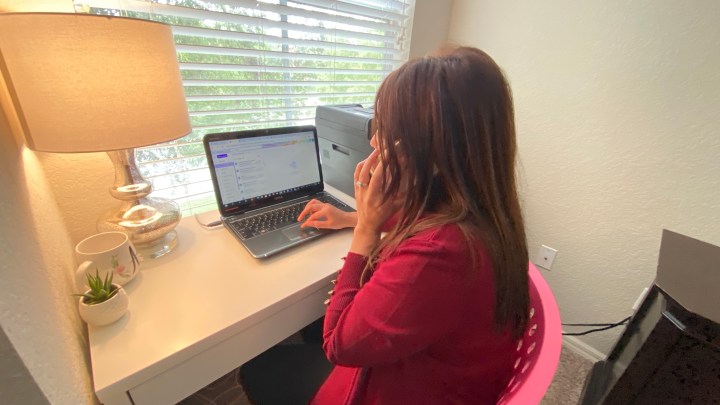 Richard Fine began our Zoom call with a warning about the hammering sound I was about to hear. His downstairs neighbor has recently undertaken some construction.

“That’s just the joys of working from home,” he said.

Fine talked to me from the bedroom of his Manhattan apartment because his wife and son were working and learning remotely in the other rooms. He’s an executive at Zocdoc, the doctor appointment booking site.

“We have committed to the full company that we will not mandate people to come back until Labor Day of 2021,” Fine said.

“I think it’s a pretty inferior form of work,” he said.

The longer the pandemic lasts, the likelier it seems that many of us will be working from home forever. A new S&P Global survey finds that nearly two-thirds of organizations say a significant increase in remote working will be permanent. Granted, there are many people who like remote work — there’s no commute and more flexibility. But I heard from a lot of people who have found it very challenging.

Nyala Khan is the head of talent at the health care company Eden Health and a single mom, living in a small apartment in Queens with her 6-year-old daughter who’s doing school online.

“I feel like I’m a meaner mom to her because my patience is immediately low now compared to before, and my stress is incredibly high,” Khan said. “And she claps back pretty hard. She’ll be like mommy, you just yelled at me, that was not nice.”

She is grateful that she gets to spend more time with her daughter. At the same time, she misses interacting with her colleagues in person.

So does Kate Adams in Milton, Massachusetts. She’s a marketing executive at a tech company called Drift. She has friends at the office.

“You know, on Fridays at 4 o’clock, we’d send up the bat signal, and go join each other in the kitchen and grab a glass of wine and hang out and just like decompress,” she said. “I miss that desperately.”

Last she heard, the office probably won’t reopen until June. So for now, she and her coworker have come up with this game.

“We have a contest sometimes when we’re on Zooms, like if we can make each other laugh,” she said.

They even keep score.

It’s not the same. But it’s the best they’ve got.