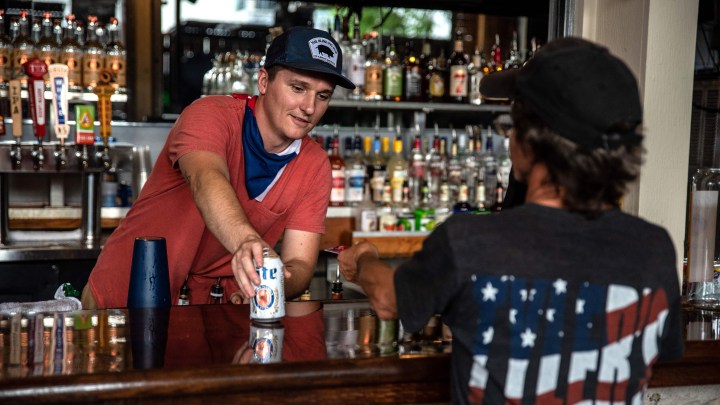 Here’s why some are too optimistic about the pandemic

COPY
Optimism bias can cause some to flout safety guidelines, like mask wearing and social distancing. Sergio Flores/AFP via Getty Images
COVID-19

Here’s why some are too optimistic about the pandemic

Optimism bias can cause some to flout safety guidelines, like mask wearing and social distancing. Sergio Flores/AFP via Getty Images
Listen Now

We are now seven months into the pandemic, and the numbers are once again getting worse. Average new cases per day have jumped in the past week to more than 50,000.

The fear is we might be letting our guard down because of what’s called optimism bias. Behavioral scientists and economists have found patterns suggesting we downplay the likelihood of bad news, whether it’s investments, business plans or getting COVID-19.

“Optimism bias is our tendency to overestimate the likelihood of experiencing positive events — such as financial success or having a long, happy marriage — and our tendency to underestimate the likelihood of experiencing negative events,” said Tali Sharot, a cognitive neuroscientist at University College London and author the “The Optimism Bias.”

With the pandemic, we get good news one day, bad news the next. Sharot has found that people underprocess the bad news and don’t build it into their expectations.

“We take in the positive a little more than the negative. And in fact, we’ve done brain imaging studies that show the brain encodes this unexpected positive information about the future better than unexpected negative information,” she said.

Optimism can be a good thing. It’s tied to longer lives and less depression. But it can also lead to reckless behavior, like borrowing too much money or being careless about COVID-19, according to a study Marie Helweg-Larsen is writing up. She teaches psychology at Dickinson College in Pennsylvania.

“When people don’t think they are personally at risk, they are less likely to wash their hands or engage in social distancing,” she said.

Helweg-Larsen said optimism bias is hard to overcome, but one way to fight it is to force yourself to develop good habits, like washing your hands over and over again, for 20 seconds, until you no longer think about why.

“We don’t brush our teeth as a result of some careful risk estimation of our cavity proneness. We don’t stop wearing our seat belts because we have not experienced seat belts saving our lives. We just do those things because they’re habits,” she said.

There is another type of overconfidence experts worry about. Management professor Don Moore at the University of California, Berkeley, Haas School of Business studies salience bias. That’s when people overemphasize things they see, like the healthy people they encounter at the park or at the supermarket, during the pandemic and downplay what they don’t see.

“The sick disappear,” he said. “They’re in isolation wards in hospitals. We don’t see them. Another important dimension is those individuals who are being the most cautious. They are also invisible to us. They’re at home.” In other words, it’s easy to assume this COVID thing is no big deal.

Moore cites a classic study of college students that shows how we can draw the wrong conclusions by seeing only what’s in front of us.

“Many have the mistaken impression that others like to party and drink more than they do,” Moore said. “Well, the shy people, they’re in their dorm rooms studying. And the ones who you see on Friday night, those are the ones who like to get out and party and drink.”