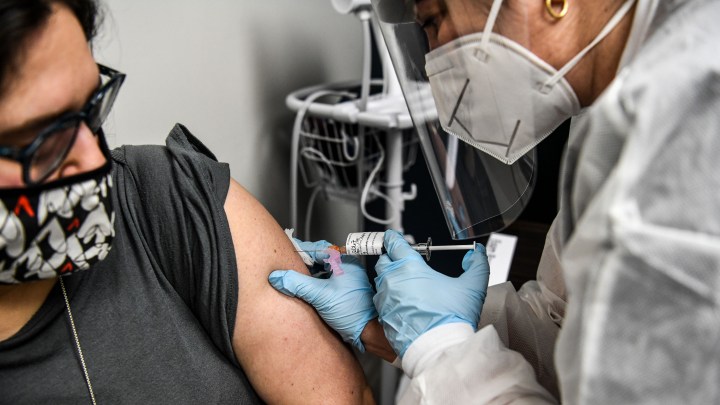 COPY
A volunteer receives a COVID-19 vaccination in a trial at the Research Centers of America in Hollywood, Florida, in August. Chandan Khanna/AFP via Getty Images
COVID-19

A volunteer receives a COVID-19 vaccination in a trial at the Research Centers of America in Hollywood, Florida, in August. Chandan Khanna/AFP via Getty Images
Listen Now

The race is on to develop a COVID-19 vaccine, but there are lots of unanswered questions out there.

What drug company will make it? When the vaccine will arrive? Who will be first in line to get it? And when it does arrive, it’s really not clear if the infrastructure will be in place to distribute it.

Creating a new vaccine has its own scientific challenges. Then come the logistics.

“The different vaccines that are under development have different storage needs and different infrastructure needs,” said Katherine Baicker, a health economist at the University of Chicago. For instance, some need medical freezers that cost thousands of dollars. “A negative-80-degree freezer is not the kind of freezer you buy at Home Depot,” she said.

There may be shortages of those freezers, as well as vials and special syringes — and who knows what else.

“We could, theoretically, just as we did with testing supplies, run into some problems of having enough vaccine, but not enough of the injection material to actually put the shots in the arms,” said Georges Benjamin, director of the American Public Health Association.

And even if the supplies are there, trained personnel are needed.

But health departments are cash strapped, and money to administer the vaccine may not come in until the vaccine arrives.

Lori Tremmel Freeman, CEO at the National Association of County and City Health Officials, said if the funds were available earlier, “we could be preparing by already ramping up the workforce.”

Money could help with that vaccine prep, but there’s still uncertainty about exactly what to get.

“We may have to return something or be stuck holding the bag, if you will, because we have a product that is not useful,” said Umair Shah, who runs the Harris County Public Health department in Houston.

Local health authorities are waiting, and in the meantime responding to the pandemic.