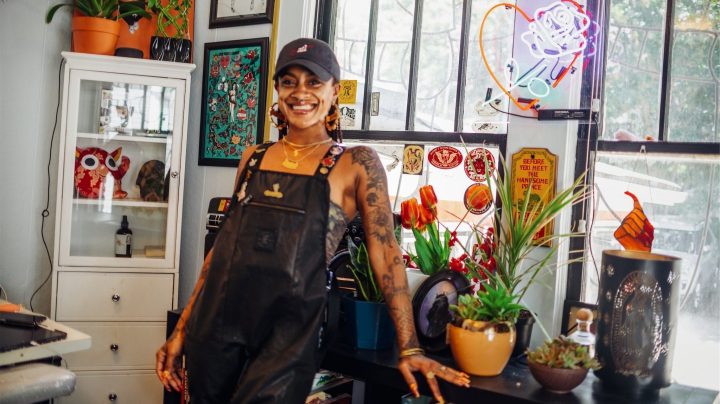 Debbi Snax, a tattoo and mural artist based in Atlanta, Georgia, has been giving tattoos for nearly eight years. She’s observed that “tattooing in Atlanta is cliquish [and] it’s segregated.”

While she says that the pandemic and the protests over the summer have been opening people’s eyes a bit and allowing them to see the lack of representation in tattoo spaces, Snax says there’s often an expectation for Black tattoo artists to specialize in Afrocentric art.

But Snax says, “That’s just not my style.” When describing her own work, she says, “I like to think that it’s traditional art — it’s just the Black representation of that.”

During the pandemic, Snax has found her books pretty full. And at one point, she realized she needed a break. Snax recalls one client who told her that she didn’t quarantine at all and that she had been at the club, not wearing a mask. After that experience, Snax says, she decided to step away from Atlanta.

Snax spent about a month in New York, where she gave tattoos to people she already knew, and worked on her artistic practice. She also used the time to mentally prepare for a job at a new tattoo shop when she returned to Atlanta. Snax is used to having co-workers of color, and the new job is her first time working at a shop with an all-white staff.

Fortunately, she says, the new job has been going well. She appreciates how the shop has been really “on top of it” when it comes to COVID-19-related safety, and doing things like taking people’s temperatures.

Still, she’s thankful she took the time to prepare for it, because it helped her feel “ready to move forward.” The new job, she says, isn’t just “a new environment as far as the color of people, or what their race is, but it’s a push for my art.”