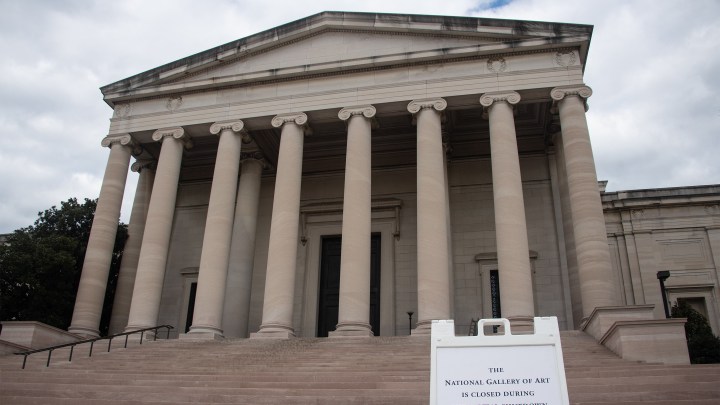 COPY
The National Gallery of Art in Washington is currently closed due to the COVID-19 pandemic. Nicholas Kamm/AFP via Getty Images

The National Gallery of Art in Washington is currently closed due to the COVID-19 pandemic. Nicholas Kamm/AFP via Getty Images
Listen Now

The National Gallery of Art in Washington, D.C., like many museums, has been closed during the pandemic. When it reopens, it will include the collection’s first painting on canvas by a Native American artist. Jaune Quick-to-See Smith is a member of the Confederated Salish and Kootenai Tribes of Montana. Her 11-foot-tall mixed-media piece, “I See Red: Target,” from 1992, explores the commercial exploitation of Native culture.

At the age of 80, Smith joins the likes of Jasper Johns and Andy Warhol in the National Gallery’s pop art collection. Kathleen Ash-Milby, a curator of Native American art at the Portland Art Museum, wondered: What took so long?

“What is really jarring specifically about the National Gallery is that it is supposed to represent the art of the nation, and Native American art is a big part of that,” she said.

The museum does have photographs and works on paper by Native American artists. With the arrival of director Kaywin Feldman in late 2018, the gallery is working on a more inclusive strategy, said Anabeth Guthrie, chief of communications.

“In order to fulfill our mission and to represent America, we need to better reflect America in our holdings,” she said.

“It can’t just be one,” said Sascha Scott, an associate professor who teaches Native American art at Syracuse University. “There has to be better representation, and I don’t think that’s a challenge given how many exceptional artists are working today.”

Scott had just compiled a list of such artists for her students, including Diné photographer Will Wilson, multidisciplinary artist Edgar Heap of Birds of the Cheyenne and Arapaho tribes, and the Cherokee painter Kay WalkingStick.

Traditionally, even contemporary indigenous artists have been featured in museums of anthropology or Native American culture, said Bill Anthes, a professor of art at Pitzer College in California. That’s changing, with recent investments by other institutions like the Metropolitan Museum of Art in New York, he said.

“It’s really an interesting moment where we’re starting to recognize that those artists belong in the greater art history, not in a niche,” Anthes said.

That recognition will likely come with higher prices for the artworks, which he said have been undervalued.

“Not to put it crassly, but they’ve been kind of a good buy for collectors,” he said. “I do think that is starting to change with this new wave of notice.”