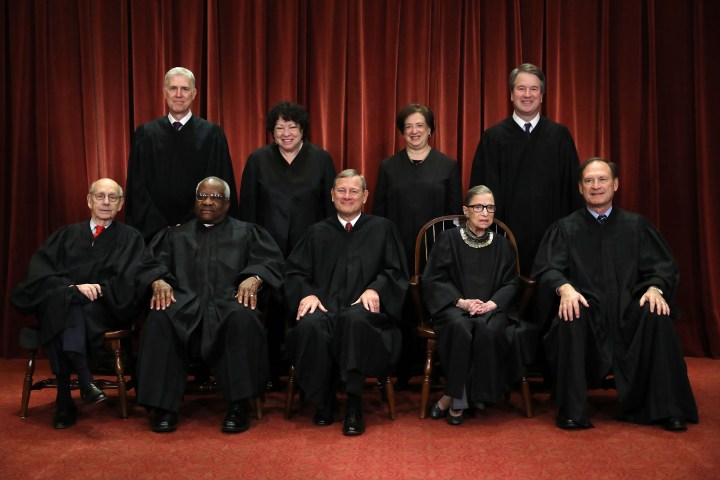 A view of the U.S. Supreme Court back in 2018. Chip Somodevilla/Getty Images
Elections 2020

A view of the U.S. Supreme Court back in 2018. Chip Somodevilla/Getty Images

As Senate Republicans plan to forge ahead with the confirmation process for President Donald Trump’s Supreme Court nominee, some Democrats are pushing to have the the court reformed entirely.

On Saturday, Trump announced he’s nominating Judge Amy Coney Barrett to fill the vacancy left by the death of Justice Ruth Bader Ginsburg. Senate Republicans are pushing to vote for the conservative judge ahead of the election, which is only about a month away.

Several Democratic leaders have voiced their support for adding more justices to the court, known as “court packing,” to address the imbalance that Trump’s pick would create by leaving the court with six conservative justices and three liberals. The court is set to rule on the Affordable Care Act and could overturn Roe v. Wade, which made abortion legal in the U.S. These, along with the court’s other decisions, could have huge ramifications for everything from civil liberties to the economy.

Nine isn’t a number that’s set in stone — the Constitution doesn’t state how many justices must be on the Supreme Court. There were originally six justices on the court, with that number fluctuating throughout the country’s history.

Democratic Sen. Ed Markey of Massachusetts tweeted that if Senate Majority Leader Mitch McConnell goes against his precedent of not filling a Supreme Court vacancy in an election year, “we must abolish the filibuster and expand the Supreme Court.” Rep. Alexandria Ocasio-Cortez, D-N.Y., echoed that sentiment, saying, “We should leave all options on the table, including the number of justices that are on the Supreme Court.” Democratic presidential nominee Joe Biden, however, declined to answer whether he’d add more justices to the court when asked during a recent TV interview.

Packing the Supreme Court has been tried in the past, most recently during the Great Depression.

In one of the most prominent attempts, Franklin D. Roosevelt wanted to add up to six additional justices to the court (one for each justice over the age of 70.)

At the time, there were four conservative justices, three liberals and two moderates. His legislative proposal, known as the Judicial Procedures Reform Bill of 1937, would have brought the total number to 15.

“The court was a thorn in Roosevelt’s side, so he tried to weaken it as a resistant force,” said Richard D. Friedman, a professor at University of Michigan Law School and an expert on Supreme Court history.

Friedman said Roosevelt fought for this plan because the Supreme Court struck down several parts of his New Deal, the series of regulations and programs he pushed in response to the Great Depression. They included the National Industrial Recovery Act, which aimed to eliminate unfair competition among businesses, recognized workers’ right to unionize and provided $3.3 billion to hire Americans on public works projects, as well as the Agricultural Act of 1933, which granted direct payments to farmers who cut down on the production of certain crops so that the prices of those crops would rise.

Though Roosevelt was elected in 1936 in a landslide, with the Democratic Party controlling both the House and the Senate, several key events transpired that weakened Roosevelt’s plan to pack the court.

Friedman said that the court ended up issuing significant decisions on the liberal side anyways; one of the conservative justices, Willis Van Devanter, retired, which opened up a nomination for the president; and Sen. Joe Robinson, a key supporter of FDR’s bill, had died.

The Senate Judiciary Committee also released a report that said “we recommend the rejection of this bill as needless, futile, and utterly dangerous abandonment of constitutional principle.”

When the bill was sent to the floor, the Senate voted 70-20 to send it back to committee.

“That was the only time since 1869 that any president has tried to pack the court. And you had a president at the height of his political power who tried to do it,” Friedman said.

Friedman said the only period when there have been more than nine justices was for a brief period starting in 1863, when Congress added a 10th justice seat to help President Abraham Lincoln. He wanted to appoint justices who would further his aims during the Civil War of “preserving the Union and ending slavery,” wrote Timothy S. Huebner, a professor at Rhodes College, for SCOTUSblog.

Following Lincoln’s assassination, Friedman said the Republican-controlled Congress reduced the size of the court to seven to prevent President Andrew Johnson, a Democrat, from adding more justices to the court. Congress finally set the number back to nine in 1869, after Ulysses S. Grant, a Republican, was elected president.

In 1870, the Supreme Court declared paper currency to be unconstitutional in a 4-3 ruling. Shortly after, Grant nominated two candidates who ended up reversing the court’s decision. It was well-established that one of the justices, William Strong, supported legal tender, which led to accusations that Grant was packing the court with his choices.

Several of the current cases in front of the court also have major economic implications, like the Affordable Care Act. There are more than 20 million Americans insured under the ACA who are at risk of losing that coverage. One study shows that a majority of all U.S. personal bankruptcies are tied to medical issues, because of either the high costs or the need to take time off of work.

Trump also said it “is certainly possible” that his nominee will be involved in a court decision to overturn Roe v. Wade. Lack of access to abortion services imposes a financial burden on many women and nearly half of women who have abortions live below the federal poverty level.

What Dems would need to do to reform the court

Changing the number of justices on the court requires a new statute, which means a president would need control of the House and the Senate, according to Aaron-Andrew P. Bruhl, a professor at William & Mary Law School.

But Bruhl said for most laws to pass, you need 60 votes in the Senate.

Bruhl explained that even if Democrats managed to control the majority in the Senate, it would be tough to get 60 votes. “So what that would mean is, in order to pass that statute, you would need to get rid of the filibuster for legislation,” he said.

There are also other ways that congressional leaders could reform the Supreme Court, with one option to reduce the term that justices serve.

Democrats in the House of Representatives plan to introduce a bill this week that would limit the justices’ lifetime appointments to 18 years. It would allow every president to nominate two justices per four-year term, according to Reuters.

He added that Democrats could also try to reduce the Supreme Court’s jurisdiction. “You could have, for example, a law that tries to keep the Supreme Court from ruling on the constitutionality of health care legislation,” he said.

Out of those options, the push to pack the court is gaining the most traction among Democrats.

Currently, however, adding more justices doesn’t have a lot of public support. Only 32% of Americans support increasing the size of the Supreme Court, according to a new ABC News/Washington Post poll. But the majority do think that the winner of the presidential election should fill the Supreme Court seat left by Ginsburg.

Bruhl said if the court is expanded, it raises the question of whether Republicans will then decide to add more justices once they have control again.

“And overarching all this is a question of political morality, which is, are you worried about further eroding further the legitimacy of the Supreme Court, and making it even more obviously a political tool?” Bruhl said. “And a counter response to that, is well, it’s already a political tool.”