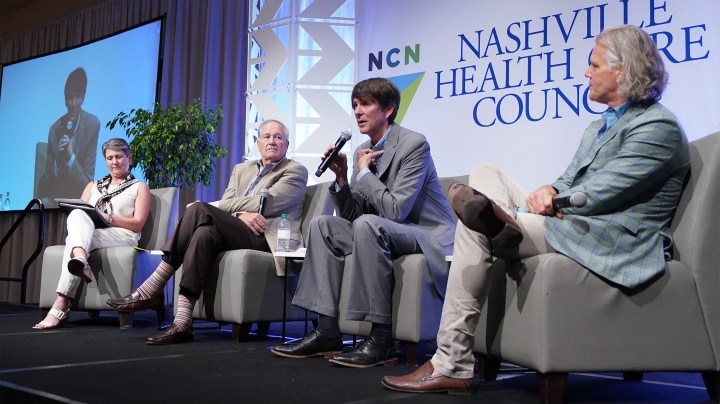 It’s been a point of pride in Nashville’s health care community just how many companies trace their roots back to HCA, the nation’s largest hospital chain, valued at more than $45 billion. It’s locally known as the “family tree” and has made the city a national hub for health care services. But health care leaders in the city also say it has failed to build critical diversity within its upper ranks.

In Nashville’s dominant health care sector, Chris Poole is one of the few Black entrepreneurs.

“Given where society was when health care got started in this town, there just isn’t really anyone who looks like me who is in that circle,” he said.

That circle was only white men when HCA incorporated in 1968.

Today, Poole said the barriers for Black business leaders in health care are more subtle than they would have been 50 years ago. He recounts being up for a senior role on two occasions. He was well qualified, with an MBA from the University of Chicago.

He said the companies picked people who were less qualified but who had other connections: kids in Scouts with company executives’ children and membership in the same exclusive country club.

“These things happen, and they happen a lot,” he said. “Now was it overt racism? It’s so difficult to sort of nail down such an absolute conclusion.”

What Poole can say with confidence, having worked in the industry for a decade, is this: “Nashville loves to do business with people they know.” And he said they are usually white men.

Hayley Hovious, president of the Nashville Health Care Council, said this is obvious to her.

“You can’t walk into a Health Care Council event without thinking that to yourself,” she said.

‘A lot more work that we need to do’

Hovious, who is white, has hired Black staffers and launched programs to develop diverse leaders in the industry, but that hasn’t resulted in changes to the council’s powerful board of directors. The board has fewer people of color than at points in the past, she said. Two-thirds of the seats are reserved for the largest companies in town, and they’re usually filled by white men.

The heads of Nashville General Hospital and Meharry Medical College — both Black men — are not currently serving.

“In a lot of ways, our audience is going to reflect the companies that are our members,” Hovious said. “And it’s pretty clear that there’s a lot more work that we need to do.”

The concerns extend beyond corporate diversity.

This is an industry that has a direct effect on people’s health and their longevity. And Black patients have fared worse in health care outcomes by many measures.

“As a result, hospitals and health systems may retain policies, procedures and processes that inadvertently lead to health disparities,” Reynolds said.

COVID-19 provides a timely example. Researchers are finding that Black people have a harder time getting a COVID-19 test.

Reynolds said this is primarily because health systems have historically located hospitals and clinics in affluent areas where more people have health insurance to pay their bills. So that’s where testing has also been more accessible.

“From a business standpoint, that makes logical sense,” he said. “But from an equity and disparity standpoint, this really leads to vulnerable populations not getting the testing that’s necessary to control spread.”

But from an equity perspective, Reynolds, who is Black, said catering to white patients has done more than contribute to COVID-19’s lopsided impacts. It also plays a role in higher rates of chronic conditions and maternal mortality.

“More than anywhere, this industry needs to reflect America,” said Bobby Frist, the current chairman of the Nashville Health Care Council and a literal part of its family tree.

His grandfather and uncle started HCA. Those connections helped him launch HealthStream, a publicly traded company that provides continuing education for staff in hospitals.

“In some ways, success comes from success,” Frist said “And spinoffs, they can perpetuate the existing status if you’re not careful and intentional.”

HealthStream put out a statement condemning the police killing of George Floyd in Minneapolis and referencing a “deep crack in our foundational right to equality.” The three sentences are still at the top of the company’s homepage.

HCA has released a lengthy plan to accelerate diversity initiatives and promote people of color to leadership roles in its 180 hospitals. And other companies have followed their lead. Nashville-based Envision, which primarily staffs emergency rooms, disclosed that its senior executives are 75% male and 85% white.

“In order to chart our course to becoming a more diverse and inclusive organization, we must first acknowledge our starting point,” the company said.

But it shouldn’t have taken nationwide protests to see what needs changing, said entrepreneur Marcus Whitney.

He published an essay in June about his own struggles as a Black entrepreneur trying to break into the health care sector and ultimately needing a white partner to be successful.

“Whatever the efforts are, whatever is going on, whatever our standards of success are as it pertains to diversity, equity and inclusion, it’s not hitting the mark,” he said.

Whitney said health care is so important to the economy, the country can’t achieve more racial equity until one of its leading industries does.