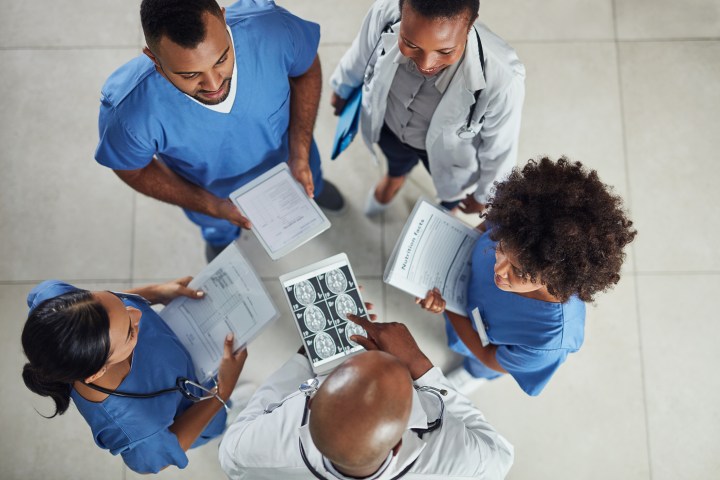 What happens when a company says it values diversity but doesn’t do the work needed to live up to that value?

Employees of color might end up doing that work without pay — something Adia Harvey Wingfield calls “racial outsourcing.” Wingfield, a sociology professor at Washington University in St. Louis, coined the term to describe a phenomenon she says is becoming more prevalent in today’s economy.

“What often ends up happening is that organizations don’t devote the resources, attention and programming to creating more diversity. Instead, they leave that work up to black professionals in their employ — who end up doing additional labor, often uncompensated, to try to make organizations more accommodating to minority communities,” Wingfield said.

How racial outsourcing plays out in the healthcare industry is the subject of Wingfield’s new book, “Flatlining: Race, Work, and Health Care in the New Economy.” She spoke with Marketplace’s Kimberly Adams about how hospitals and clinics shift the labor needed to achieve their diversity goals onto black healthcare professionals.

What does racial outsourcing look like in the health care industry?

“Racial outsourcing doesn’t look exactly the same for black professionals across the board,” Wingfield said.

Doctors tend to do additional “equity work” at a structural level — like establishing community organizations in order to reduce racial health disparities and mentoring students of color who are coming up through the ranks.

“They were often aware that social connections and networks mattered a lot when it comes to succeeding in medicine. But they also knew that black students and new doctors were likely to be excluded from a lot of the connections that can lead to high-status jobs. Or to jobs, period,” said Wingfield.

Nurses might instead focus on patient care, advocating for patients of color to get fair treatment at the medical facility.

For medical technicians, who are lower in the organizational hierarchy than doctors and nurses, Wingfield said racial outsourcing was often more explicit.

“They had to deal with managers who would openly assign them additional responsibilities outside of the bounds of their job description,” she said.

How do companies participate in racial outsourcing?

While medical technicians might have additional equity work explicitly mandated by management, the equity work done by doctors and nurses tends to be voluntary.

Still, said Wingfield, health care organizations often know that employees are taking on the extra work — and know that the work is critical to achieving their organizational mission.

“Black health care workers are doing the work that organizations like to take credit for, in the sense of seeing themselves as places that are more committed to racial diversity,” she said.

“It’s labor that’s uncompensated, that’s unacknowledged and that’s unrewarded — but that still remains essential for organizations to be able to achieve their goals.”

Diversity recruitment is booming, but retention remains a “huge issue”