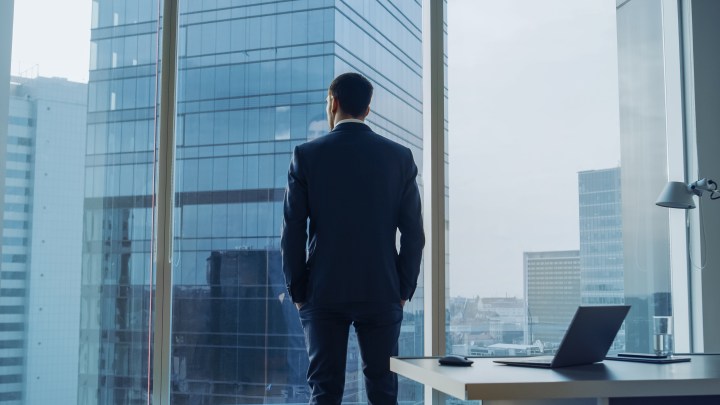 CEO sentiment can reflect overall confidence (or lack thereof) in the economy and how businesses invest or take on economic risk.

How has the COVID-19 pandemic affected that sentiment? While some have lost their optimism in their businesses or the economy since the beginning of the year, many CEOs are still optimistic their business will continue to grow, according to the accounting firm KPMG’s annual U.S. CEO outlook survey.

Some of the survey’s results include:

Most of the CEOs surveyed also indicated a willingness to reevaluate their “corporate purpose,” according to KPMG’s data.

“Marketplace Morning Report” host Sabri Ben-Achour’s talked to KPMG Chair and CEO Paul Knopp about what’s keeping CEOs optimistic about their business prospects and how they’re planning to significantly shift their work culture to a digital one.

Updated (August 25, 2020): The following edited transcript of their conversation has been added to this story.

Sabri Ben-Achour: The question is, how are U.S. CEOs? What is the outlook of CEOs?

Paul Knopp: Our study found that CEOs are optimistic about the growth prospects for their companies over the next three years, and slightly less confident about the growth prospects for the U.S. economy in the global economy. But I think the other really interesting thing is CEOs are preparing for the future, meeting the moment through digital acceleration of their efforts, and that’s really an important finding in the study.

Ben-Achour: A majority of CEOs that you surveyed say they are more confident their company will be growing compared to the beginning of the year. What is behind that optimism?

Knopp: CEOs have managed through economic cycles for many years now. You think about the global financial crisis and other economic cycles that we’ve faced into. CEOs have prepared a lot of their organizations for being very resilient as they face the future. CEOs have invested in digital technology to ensure that they are ready to operate more efficiently going forward. This is obviously an unprecedented time in our history though. We have a health crisis, we have an economic crisis, and then we have a crisis around social justice, too. While it’s an unprecedented type of crisis, CEOs are facing into it with a lot of experience in dealing with these kinds of matters.

Ben-Achour: What are CEOs telling you about remote work? And what’s going to happen to brick-and-mortar offices all across America?

Knopp: The study finds that CEOs believe that remote work, virtual work, will be a significant part of our future. Many CEOs would say we’re not going to go back to the way we used to work in the past. I think it will be a hybrid. Many employees will work much more frequently and extensively outside of the office in virtual environments, many will never return to the office, and in many cases, you’ll have employees that come back to the office to collaborate and to team, and to get together to work on future projects. But there will be undoubtedly much more work conducted in the future outside of the office environment than there was in the past.

Ben-Achour: A majority of CEOs say they’re going to downsize their office space by 68%. That sounds like we are in for a significant shift in what the workplace looks like.

Knopp: I would think that we are going to have much more collaboration and teaming space in the future. There is undoubtedly some pressure on commercial office space in offices as we move forward. But I really do think that a bit more time needs to pass. There’s going to be very much a hybrid model where we are working both in the office and virtually in the future. There’s a lot that remains unseen about how significant that impact will be on commercial office space moving forward.

Ben-Achour: There’s an increasing focus, according to your survey, on investing in digital technologies and automation. What are those two things going to look like?

Knopp: You think about the digital transformation of operating models, how companies operate their businesses internally. And that next-generation operating model is what CEOs are very focused on. But it’s more than that, it’s also transforming the business model itself. Many companies are trying to determine how they operate digitally as they face the customer. How do I do business in a digital world? How does that transform my enterprise? You certainly think about a lot of physical retail spaces that are now really looking at how they adopt e-commerce and move into this really interesting new future.

Ben-Achour: I wonder if that new future means that a lot of jobs won’t be coming back because the business model has changed.

Knopp: The way I would look at it is that a lot of the investments that CEOs and companies are making right now are to put digital collaboration tools, digital workspace tools, digital automation tools into the hands of employees to make employees much more effective and efficient in what they do every day and how they work. CEOs are trying to meet the moment at this really crucial time in our history, to allow and to enable employees to have the kinds of tools that they’re going to need to face into this new future. And there is undoubtedly still going to be the place for the employee to deliver with technology in the future and more technology than they have in the past.

Ben-Achour: Seventy-seven percent of CEOs surveyed said they need to reevaluate their corporate purpose as a result of COVID-19. What does that mean? That sounds dramatic.

Knopp: When you think about purpose, it’s very much a stakeholder view. You’re looking broadly at your impact on society in what you do and how your strategic actions within the business will impact all those different stakeholders. When we think about purpose — and the study certainly reveals that CEOs are much more focused now on purpose, values, culture, employee engagement — that is very important for our future, and we are very focused on how we sustain strong cultures while we’re working more remotely into the future.