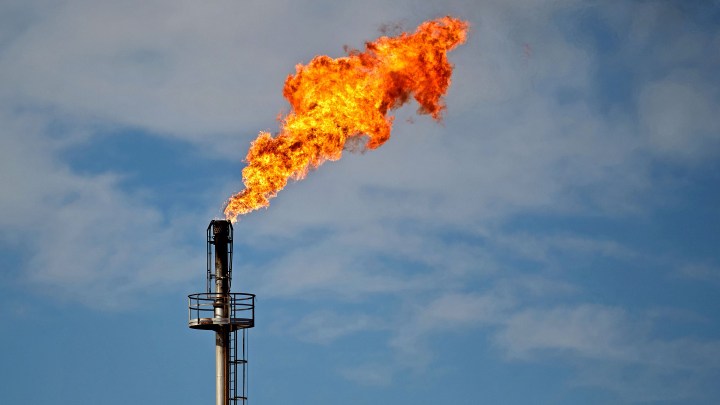 COPY
When oil producers deliberately burn natural gas, the process is called flaring. It can be a money-saving technique but has consequences for the Earth's climate. Emiliano Lasalvia/AFP via Getty Images

When oil producers deliberately burn natural gas, the process is called flaring. It can be a money-saving technique but has consequences for the Earth's climate. Emiliano Lasalvia/AFP via Getty Images
Listen Now

If you take a drive through the oil fields of West Texas and fix your gaze on the horizon, you’ll see flames shooting from the tops of vertical pipes. That’s called flaring, a technique in which oil producers deliberately burn natural gas that’s a byproduct of pumping oil from the ground. The process spews carbon dioxide and other pollutants, contributing to climate change and poor air quality.

Mark Agerton, lead author of a new study from Rice University and an agricultural and resource economics professor at the University of California, Davis, said it’s often cheaper for the companies to burn the gas than sell it.

“Even though the gas is a valuable product, the cost-benefit [analysis] doesn’t work out for the company,” he said.

These days, natural gas sells for so little that it’s more cost-effective to burn than send it to market through a pipeline.

Agerton said the rules in place that should, in theory, motivate oil companies to flare less, don’t have any teeth. So regulators, he said, should look into a couple of things.

“Either denying companies a permit if they don’t meet particular standards or putting a tax or fee on flaring that says, you know, you can flare, but for a price,” he said.

Oil producers have argued that no matter what the price of flaring may be, they lack pipelines to move the gas to market.

But Gunnar Schade, professor of atmospheric science at Texas A&M University, said building more pipelines to reduce the amount companies flare has its own consequences.

“Any new infrastructure that we build helps to perpetuate the fossil fuel age, and therefore is exactly not what we should be doing, if we actually want to address global climate change,” Schade said.

He said some energy companies have already reduced the amount they’re flaring.

“And they’ve done this not because there’s regulation but because it makes a lot of good sense and it’s the responsible thing to do,” he said.

But Schade said not all companies see it that way. And until it makes economic sense to reduce flaring, the industry as a whole will continue to burn.