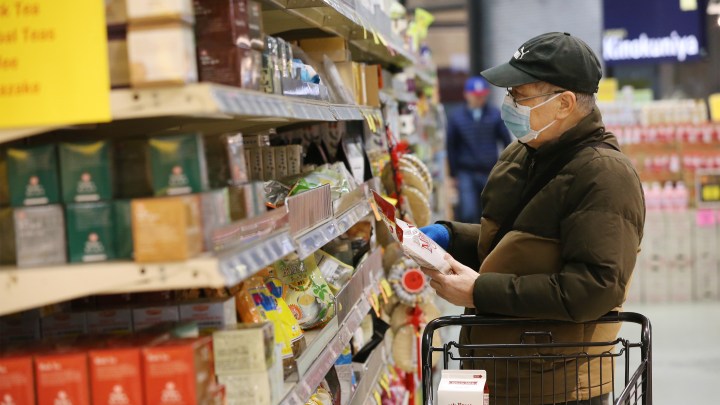 COPY
A man shops for groceries at a Seattle supermarket. The downturn has propelled millions of Americans into the federal nutrition assistance program. Karen Ducey/Getty Images
COVID-19

A man shops for groceries at a Seattle supermarket. The downturn has propelled millions of Americans into the federal nutrition assistance program. Karen Ducey/Getty Images
Listen Now

The COVID-19 pandemic is changing the way we shop for food.

More of us are eating at home, and more of us are out of work and struggling to find ways to pay for necessities.

With extra unemployment benefits running out and food prices going up, the grocery stores of America, and shoppers themselves, are going to face some hard decisions.

Despite the economic downturn, many of us are spending more at the grocery store, stocking up in the panic-buying days or just buying more because we are eating at home more.

And thanks to expanded federal relief benefits, consumers have been able to pretty much keep buying the types of products they want.

“In our numbers, 40% of people were telling us that they were very pessimistic about their finances,” Corlett said. “But many of them were being supported by a stimulus check or additional weekly unemployment payments, so it delayed the financial crisis.”

The downturn has propelled millions of Americans onto SNAP — the federal Supplemental Nutrition Assistance Program.

Joan Driggs, a vice president at analytics firm IRI who follows the grocery industry, said typically, those benefits account for about $100 billion a year in grocery spending.

“But with all the increased unemployment, we’re looking at an additional, like, $20 billion increase in SNAP spend coming up,” she said.

And in addition to more people using the program, they are using it in different ways. The U.S. Department of Agriculture has expanded the number of states where people can use SNAP to buy groceries online, like at Amazon or Walmart, although delivery fees aren’t covered.

“The ability to shop with SNAP benefits online really brings that convenience to households that hadn’t had that before,” Driggs said.

According to the USDA, in March just 35,000 SNAP households were buying groceries online. In July, it was close to a million.

In the meantime, there’s additional strain on family budgets. Higher food prices, for one, said Elaine Waxman, a senior fellow at the Urban Institute.

“They’re probably paying more for the same amount that they were trying to get before,” Waxman said. “The other thing that families have mentioned to me is that the cost of [personal protective equipment] has typically eaten into their food budget.”

Budgets waiting for more federal relief, if there’s ever a deal. 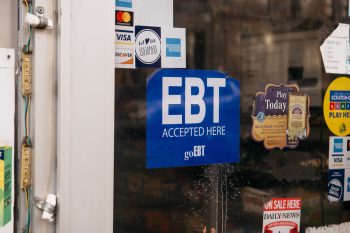