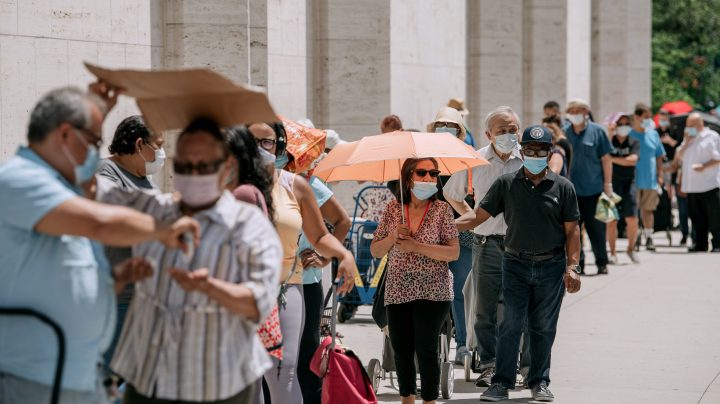 COPY
There is likely to be another big spike in SNAP enrollment now that Washington has let federal unemployment benefits expire. Scott Heins/Getty Images
COVID-19

There is likely to be another big spike in SNAP enrollment now that Washington has let federal unemployment benefits expire. Scott Heins/Getty Images
Listen Now

When Joseph Baker applied for SNAP benefits in the chaos of early April, he was surprised how quickly he got approved.

“When I applied they were like, well you qualify for emergency assistance, we’re going to have the card to you in 5 day. And I’m like, ‘oh! Ok! That’s great!” he said. He had been scared to death, when he first lost his job as a firearms instructor and pawnbroker, wondering how he was going to keep paying all his bills and feeding his two kids. But within days, Baker said, the state of Florida sent him an EBT card, “and I was able to immediately put fresh fruit and vegetables in the house.”

At the time, the federal government had just made it easier for states to approve people for SNAP benefits, by waiving the interview requirement and by allowing states to push out the recertification process for families whose benefits were about to expire so they could concentrate on processing new applications.

“That allowed us to manage our spike in caseload,” said Duke Storen, commissioner of the Department of Social Services in Virginia, which saw applications for SNAP triple in the first few weeks of the pandemic.

“If you look across that time period of the really big spikes in application, we maintained our timely processing of applications, we didn’t lose a step. Had we had to do all those interviews and all those renewals, we never would have been able to keep up.”

But that flexibility is ending later this month. The U.S. Department of Agriculture has told states that as of Sept. 1, they will no longer be able to waive the interview for all new SNAP applicants, and they will also have to start processing recertifications. That has state officials and anti-hunger organizations around the country concerned that people may end up experiencing long delays in getting their benefits.

“I’m most worried that the average time to process the applications will increase significantly, and people will go hungry while they’re waiting for their application to be approved,” Storen said. “We are going to see a tremendous spike in our work come September, almost twice the amount of our normal workload.”

With the waivers expiring, Virginia will have to start working its way through the 151,000 recertifications it has deferred since the pandemic began. On top of that, there is likely to be another big spike in demand for SNAP now that Congress has let federal unemployment benefits expire.

“Every single state is facing this exact challenge,” Storen said. “We are all asking USDA for an extension of the existing waivers and they’re just not willing to budge.”

States that can demonstrate that their SNAP caseload is at least 50% higher than last year will be able to apply to USDA to waive the interview for up to half of SNAP applications. According to Kate Leone, the chief governmental relations officer at Feeding America, that will likely not be enough to help states keep up this fall.

“With case loads increasing at the rate we know they are, this is really going to be a lot for states to take on, during a time when they’re taking on enrolling people in the program for the first time, and dealing with social distancing and all the other burdens that are coming on state programs right now,” she said.

Already, food banks in some parts of the country are starting to see an increase in the number of people coming in again, now that the extra $600 a week in federal unemployment benefits has expired.

“This desperation is really starting to set in in our community. We’re seeing that just how long we’ve been sustaining the economic impacts is really stretching families and seniors, families with children, to that breaking point,” said Theresa McCormick, director of programs at Second Harvest Heartland food bank in Minnesota.

If the USDA lets the interview and recertification waivers expire, as planned, at the end of August, she is concerned that people are going to start having to wait a long time for SNAP.

“That, for us, is a very concerning place as a food bank, because SNAP is so efficient — putting nine meals into the community for every one the food bank can provide,” McCormick said. “Charity and food banks alone will not be able to rise to that level of response needed for the hunger crisis that’s happening in our country right now.”