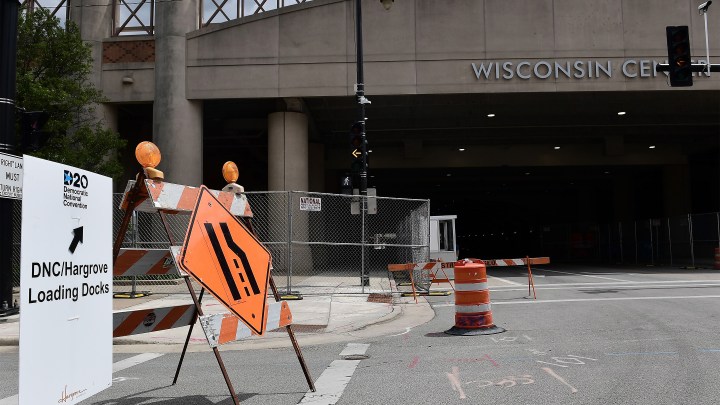 COPY
A view of the Wisconsin Center in Milwaukee, where the 2020 Democratic National Convention would have been held. Stacy Revere/Getty Images

A view of the Wisconsin Center in Milwaukee, where the 2020 Democratic National Convention would have been held. Stacy Revere/Getty Images
Listen Now

As the Democratic National Convention kicks off, it will be a shadow of what was originally organized. An event that had been expected to draw 50,000 people to the city of Milwaukee will now draw a few hundred. And with the loss of all those visitors comes a loss of revenue and opportunity for the city.

In a typical August week, Omar Shaikh’s Carnevor Steakhouse makes around $90,000. The week of the DNC, Shaikh had expected to make half a million dollars.

“Is it a gut punch that we’re not gonna get it? Yeah, absolutely. We were looking forward to just, speaking frankly, making a lot of money,” he said.

Delegates, journalists and party officials would have eaten at restaurants and stayed at hotels. Milwaukee expected an economic impact of $200 million from hosting the DNC.

“That is almost nonexistent at this point,” Alderman Robert Bauman said. “What’s even more concerning is there could actually be negative impact at this point.”

Local government has already spent around $10 million preparing for the convention. And local government employees have spent thousands of hours working on it. Bauman said that’s time that wasn’t spent on other work for the city.

Milwaukee is also losing an opportunity to show off its convention chops.

“Hosting an event like this is a way of demonstrating to other meeting and event organizers and planners that your destination can execute something of this magnitude,” said Wesley Roehl, a tourism management professor at Temple University.

Milwaukee’s experience may make cities think twice before bidding for the conventions four years from now.

“They had great hopes for economic impact from this, and they got nothing out of it,” said Eric Heberlig, a political science professor at the University of North Carolina Charlotte. “So why should we put the effort into the bidding and planning and in raising money for these things? If the parties can pull out and do virtual conventions, and we get nothing out of it?”

Omar Shaikh feels he got something out of it –an uptick in business in the pre-pandemic months as visitors scouted the city and ate at his restaurant. He kept getting offers for reservations for his back room but held out for bigger ones. In the end, he didn’t get any.

Checking in with a different Philly