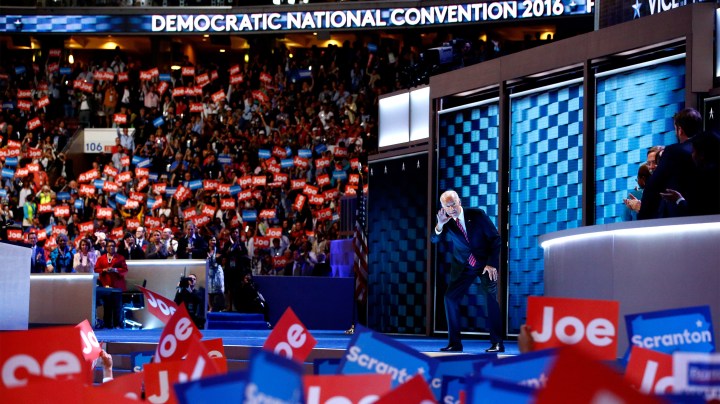 Now that Florida is one of the latest hotspots in the COVID-19 pandemic, the Republican Party is reportedly scaling back the nominating convention that it rescheduled for next month in Jacksonville after originally planning it for Charlotte, North Carolina.

This week was supposed to be when the Democrats held their convention in Milwaukee. That’s now going to be a virtual convention later this summer.

All of this got us wondering: What’s the purpose of a political convention?

Sure, a big reason is to get the parties’ nominees a bunch of free media coverage, but it’s also very much about money.

When a big political convention came to town, at least in the before times, it juiced the local economy, sold out hotel rooms, packed convention centers. People come from all over to spend money and ask for money.

“It is an opportunity for the candidates to court the media and especially elite mega donors, where they have private affairs where mega donors and candidates often are kind of ensconced in their own special party space,” said Sheila Krumholz, executive director at the Center for Responsive Politics.

And not just for the mega donors and big-name candidates.

Lisa King of Jacksonville, Florida, said she’s been to every Democratic National Convention since 1992. At one point, she was running as a pro-union candidate for city council, and she said the convention gave her a boost.

“It has been an opportunity for me to meet union leaders from all over our state and, in fact, outside our state boundaries,” King said. “I was able to raise money from local unions because they got an opportunity to meet me in person.”

Having local officials, national politicians and the media all in one place also presents a marketing opportunity for issue groups and businesses.

“For example, I had never heard of Uber until the 2012 Democratic National Convention in Charlotte, but we had a coupon in our delegate bags to allow us to use Uber while we were in Charlotte,” King said.

Conventions can be expensive for delegates — hotels, travel and meals add up. So, according to convention veteran King, sponsored events offer free food and booze.

“Delegates are on a budget,” King said. “They do like to go to those events also because they’re going to get fed.”

King said what she’ll miss most about an in-person convention this year is catching up with old friends, coordinating with other state politicians and activists, and being a part of history.