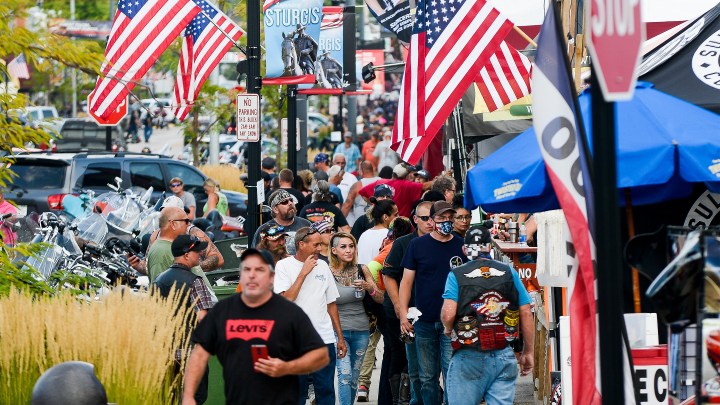 COPY
People stroll along Main Street on Thursday, the day before the start of the annual Sturgis Mortorcycle Rally. Michael Ciaglo/Getty Images
COVID-19

People stroll along Main Street on Thursday, the day before the start of the annual Sturgis Mortorcycle Rally. Michael Ciaglo/Getty Images
Listen Now

A quarter-million people are expected to roll through Sturgis, South Dakota, over the next 10 days for the annual Sturgis Motorcycle Rally.

On all other days, the population of the town on the edge of the Black Hills is about 7,000, which means the event is important economically to residents.

The rally has been scaled back in its 80th year, with no parades or contests. The city stopped advertising the event a few months ago.

“If you look at what the city nets from it, from an average rally, it’s anywhere from $1 million to $1.5 million,” he said.

That’s 11% of what the city spends on parks, roads, police, fire and other services.

Then there’s the impact to businesses already suffering because of COVID-19 — not only in Sturgis but those in the region that benefit from bikers spending money on their way to the rally.

“The thought of not having the rally would really mean that they would end up closing,” Ainslie said.

The rally annually injects some $800 million into South Dakota’s economy.

But despite the significant economic benefits of the rally, plenty of residents are worried about getting sick.

Brenda Janovy, a registered nurse in the area, raised her concerns at a City Council meeting in June. She said even in a normal year, the rally crowds area hospitals.

“We do not have the medical beds, staff, etc., that we need to deal with traumas and COVID at the same time,” she said.

The event normally draws around half a million people. While crowds may be smaller this year, the mayor has said there’s nothing he can do to prevent people from coming.

“A lot of us rent out our houses, rent our yards, etc.,” said Kimm Lischefska, who works at a bar in Sturgis. “And the people who come and stay have already said, yeah, we’re coming.”

Sturgis officials said they will conduct mass coronavirus testing after the rally ends on August 16 to learn whether all those bikers brought new cases of COVID-19 to town.