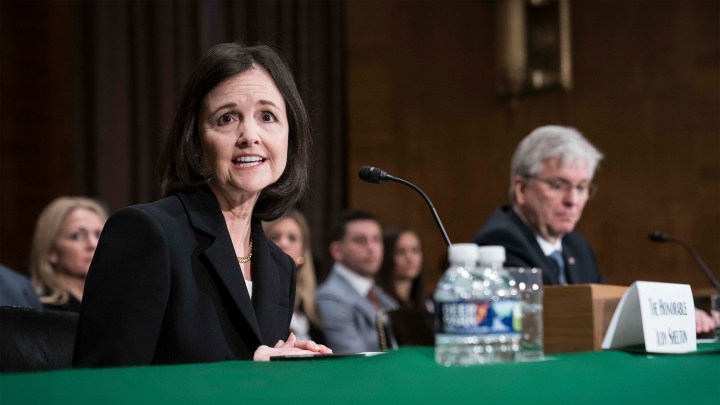 COPY
Judy Shelton, left, and Christopher Waller testify during a hearing on their nominations to the Federal Reserve board of governors in February. Sarah Silbiger/Getty Images

Judy Shelton, left, and Christopher Waller testify during a hearing on their nominations to the Federal Reserve board of governors in February. Sarah Silbiger/Getty Images
Listen Now

The Federal Reserve board of governors starts meeting Tuesday with two new reserve board nominees on the path to confirmation.

Christopher Waller, head of research at the St. Louis Fed, so far isn’t raising any eyebrows. But a couple of Senate Republicans have said they will oppose the confirmation of Judy Shelton, an economic adviser to President Donald Trump’s 2016 campaign. If they were confirmed, how might that change the Fed moving forward?

Judy Shelton has advocated for tying the value of the U.S. dollar to the price of gold, as it was before the Great Depression. Gary Richardson, professor of economics at the University of California, Irvine, said he’s not worried about Shelton getting the United States to return to the gold standard.

“The concern is that someone who’s out there advocating that we should be on a gold standard doesn’t understand monetary policy and doesn’t understand the way the economies or the national or international financial systems function,” Richardson said.

But he said because the Federal Reserve is designed with checks and balances, her influence would be limited. The other nominee, Christopher Waller, has a similar economic background to governors currently on the board.

Peter Conti-Brown at the University of Pennsylvania’s Wharton School says every appointment matters.

“Each governor and each reserve bank president gets, with the appointment, a bully pulpit,” Conti-Brown said. “And what that governor or president does with that pulpit can matter significantly.”

And he said Shelton’s personal ties to Trump raise concerns, since even the suggestion that a Fed governor might favor a sitting president could undermine the institutional benefits of an independent central bank.