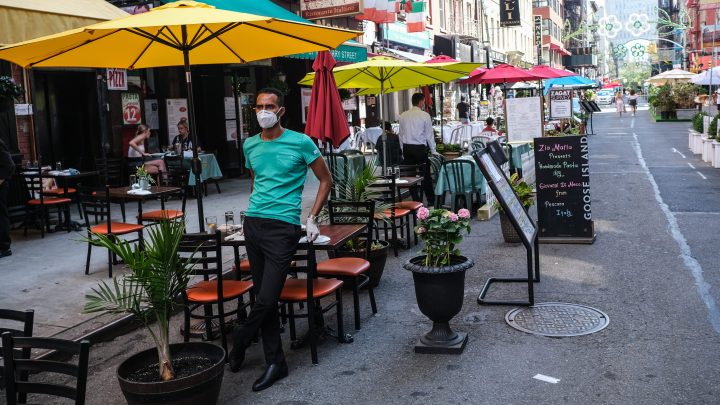 COPY
With business slow at most restaurants, some are raising wages to incentivize staff to come back. Byron Smith/Getty Images
COVID & Unemployment

With business slow at most restaurants, some are raising wages to incentivize staff to come back. Byron Smith/Getty Images
Listen Now

Before the pandemic, Colleen’s Kitchen operated the way most restaurants in Texas do — they paid their servers the tipped minimum wage, $2.13 an hour, plus tips.

But in this new world, where business is way down and so few people are dining in, owner Ashley Fric started to wonder if having staff rely on tips was still a viable model. “The answer in pandemic times is no, you cannot pay somebody $2.13 an hour and hope that guests come in the restaurant,” she said.

Tips are down between 75% and 90% nationwide, according to One Fair Wage, a nonprofit that advocates for higher wages for service workers. Because of that, a lot of restaurants are reevaluating how they pay their staff, and many are raising hourly wages to incentivize people to return to work. That is particularly true at small and medium-sized restaurants in bigger cities.

“We are seeing a tremendous change,” said Saru Jayaraman, the president of One Fair Wage. “Our organization has been approached by literally hundreds and hundreds of restaurant owners asking for our help to transition to a full minimum wage.”

At a time when a lot of restaurants themselves are struggling, it’s a challenge for many to figure out how to make that work, financially. For Colleen’s Kitchen, in Austin, getting a loan from the Paycheck Protection Program was a game changer — it allowed the restaurant to start bringing back staff at $22 an hour.

PPP funds have also kept Farmers Restaurant Group — which has seven restaurants and a distillery in the D.C. area — afloat, and made it possible for them to bring back staff at a higher hourly wage, even though their business initially dropped 95%.

Trident Booksellers and Cafe in Boston also initially offered $15 an hour, instead of the state tipped minimum wage, when they started bringing some staff back in May, according to Louie Levinson, who’s worked there for three years. Trident also initially offered to pay everyone for a full 40 hours a week, he said, whether they worked that much or not.

“$15 for 40 was great,” said Levinson, who’s also a student at Northeastern University. “I was happy to make that money.”

It still wasn’t nearly what he had been making before with tips, but it made going back to work worthwhile. Now that restaurants in Massachusetts have been allowed to reopen to some indoor and outdoor dining, though, Levinson is making a little less — about $12 an hour, plus tips — and is no longer guaranteed 40 hours a week.

“When they bumped it down that was really rough, because I was getting weekly paychecks that were in the mid-$300s,” Levinson said. “Which, $300 a week for a month is nothing in Boston.”

He is starting to get tips again, but nowhere near what he once made. In part because the cafe is still only doing a fraction of its normal business, and in part because people now pay upfront, when they order, to minimize contact.

“When people get to that final menu and they see ‘tip,’ they might be like, ‘I haven’t received anything yet, I haven’t gotten any services yet, so I’m not going to tip on this,’” Levinson said. “And then they don’t, and then they just kind of carry on. So that’s why the hourly’s been really helpful too, because there’s enough people who aren’t tipping.”

Emmanuel Munoz is also finding that people aren’t tipping as much as they used to. He works at a restaurant in Williamsburg, Brooklyn, that’s doing a lot of curbside pickup and some outdoor dining.

“You have people that sometimes over tip, give you more than 20%,” he said, “And that’s awesome. But you have one of those, and then you have 10 customers that don’t tip you anything.”

The restaurant has raised wages for servers, from $10 to $15 an hour, which has been a big help, Munoz said, but even with that bump he’s making less than he used to. He made more before, working primarily as a manager — now, with business way down, the restaurant doesn’t need managers. And tips aren’t making up the difference.

“It’s very hard,” he said. He’s struggling, the restaurant is struggling. But he also didn’t have another option. Unlike a lot of his old coworkers, he’s not eligible for unemployment.

That’s true at a lot of restaurants around the country, particularly those that pay the tipped minimum wage, which is $5 or less in most states.

“A lot of workers are saying no, I refuse to go back and put my health at risk and my family’s health at risk for $2, $3 or $4 an hour,” Jayaraman said. “That is resulting in a lot of employers just saying OK, I think I just have to pay the full minimum wage because either I have a conscience and I can’t ask workers to come back for this when tips are too low, or I realized workers won’t come back to work for this when tips are so low.”

Whether restaurants that have started paying higher hourly wages will continue to after the pandemic is another question. Some, like Farmers Restaurant Group, have already reverted back to the tipped minimum wage model. Now that restaurants have been allowed to reopen for some indoor and outdoor dining in the D.C. area, Simons said, it made financial sense both for the company, which is still operating at a loss, and for servers, who generally make a lot in tips.

“Especially right now, when we can’t build sales, and when the customer is sensitive to price increases, the math just isn’t there,” to continue paying servers a higher hourly wage, Simons said. “That’s why the prior structure is actually more affordable for the business. And in the case of my servers, they end up with more money.”

Colleen’s Kitchen is planning to keep paying employees more going forward — between $15 and $22 an hour, depending on their job description. To make that sustainable, the restaurant has instituted a 20% dine-in service charge.

“We plan to continue to pay all staff members a liveable wage that they can rely on,” Fric said. “I think it’s so important for our employees to be able to know what they’re going to take home that week, or what their anticipated take home that week is.”

Munoz is hoping the restaurant industry as a whole will move toward paying servers and other staff higher, more liveable wages.

“Why am I not able to expect that my check at the end of the week covers all my necessities?” he said. “Why do I have to wait for Friday night with a full restaurant so I can see that I am going to be able to have enough money for savings or for rent?”