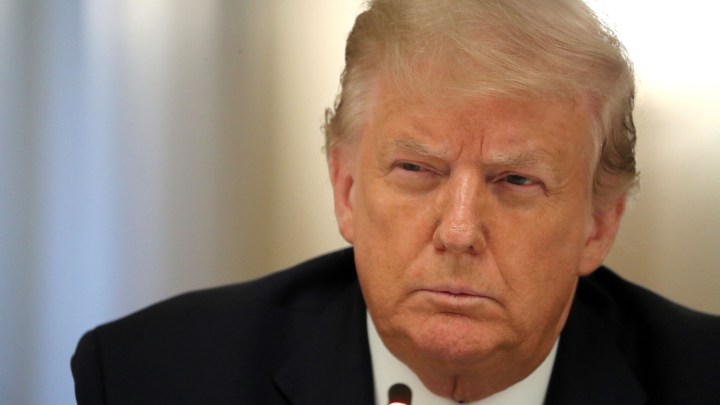 COPY
The financial records are held by Trump’s longtime accounting firm, Mazars USA, which has said it would comply with a court order. Chip Somodevilla/Getty Images

The financial records are held by Trump’s longtime accounting firm, Mazars USA, which has said it would comply with a court order. Chip Somodevilla/Getty Images
Listen Now

The audio attached to this post features an interview from the “Marketplace Morning Report” with Richard Painter, a law professor at the University of Minnesota and chief White House ethics lawyer for President George W. Bush.

The Supreme Court on Thursday upheld a prosecutor’s demand for President Donald Trump’s tax returns as part of a criminal investigation that includes hush-money payments to women who claim they had affairs with Trump.

The court ruled 7-2 in a case in which it heard arguments by telephone in May because of the coronavirus pandemic.

The records are held by Trump’s longtime accounting firm, Mazars USA, which has said it would comply with a court order. It probably will be at least several weeks before the court issues a formal judgment that would trigger the turnover of the records.

The court rejected arguments by Trump’s lawyers and the Justice Department that the president is immune from investigation while he holds office or that a prosecutor must show a greater need than normal to obtain the records.

Shortly after that decision, the high court kept a hold on President Donald Trump’s financial records that Congress has been seeking for more than a year. The ruling returns this separate case to lower courts, with no clear prospect for when the case might ultimately be resolved.

This outcome, also 7-2, is at least a short-term victory for Trump, who has strenuously sought to keep his financial records private.

The high-stakes disputes have tested the balance of power between the White House and Congress, as well as Trump’s claim that he can’t be investigated while he holds office.