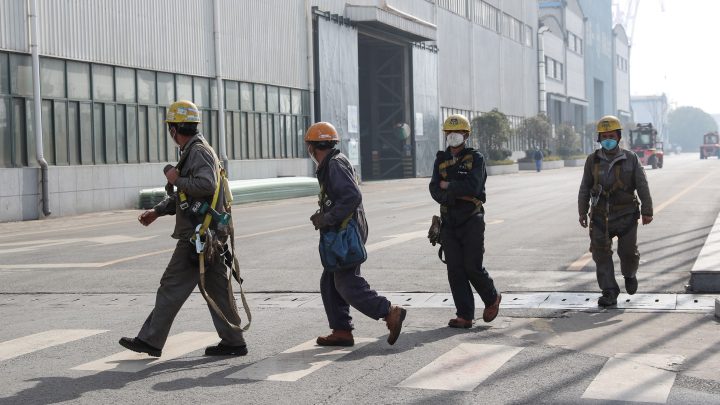 COPY
Workers at a shipyard in China's Jiangsu province. For the first time, China has not set a GDP growth target. STR/AFP via Getty Images

Workers at a shipyard in China's Jiangsu province. For the first time, China has not set a GDP growth target. STR/AFP via Getty Images
Listen Now

China announced Friday that for this year at least, it’s scrapped its longstanding practice of setting an annual target for GDP growth. It amounts to an acknowledgment that the economic sledding will be tough, for both China and the world economy.

Well, GDP isn’t everything. In fact, many China watchers are cheering.

You can call it a good-news, bad-news story. First, the bad: Without a GDP target, Beijing is less likely to push a big economic stimulus to juice global growth, disappointing investors around the world. But China doesn’t need it, said attorney Lester Ross, who works in the Beijing office of the law firm WilmerHale.

“China has recovered in most respects from the pandemic. So there’s less need for the kind of stimulus we saw back in 2008,” Ross said.

That was when China spent a whopping $586 billion to fight the Great Recession. Back then, Beijing had GDP targets, and local officials who met them got promoted. So many officials channeled stimulus cash into projects with short-term gain, long-term pain: dirty factories, companies that went under, bridges to nowhere.

That shortchanged other investments, said China scholar Susan Shirk at the University of California, San Diego.

“For years, the central government said they should build more schools,” Shirk said. “The goals are never met, because the No. 1 criteria for official promotion was the growth rate.”

So from the perspective of reformers, here’s the good news. The policy change opens a window into longer-term priorities that would strengthen the Chinese economy, like better education, greater innovation and putting more money into the pockets of consumers.

“You subsidize consumers, no American company is going to complain to the Chinese government: ‘Oh my God, you are subsidizing Chinese consumers!’ Right?” said Yasheng Huang, who studies China at MIT.

If Beijing goes in that direction, it would be a win-win for China and the world, Huang said.